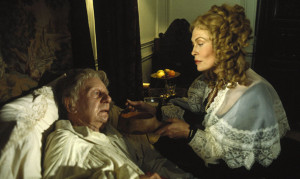 The shameless Barbara seduces Sir Ralph when her sister Caroline is to be wed to him. She then takes him for her husband and sets about shunning him because his country life is boring to her. Excitement seems only to be had in the city or at the hands of the gamblers. When one day she loses a beloved jewelled trinket, she takes it into her own hands to steal it back. dressed as a highwayman, shotting and punching her way to the prize. Now excitement is found at the hands of the pistol and the horse but for how long? 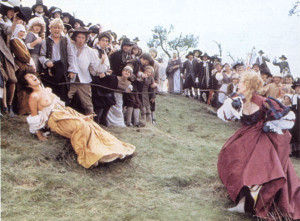 Michael Winner is or at least was, a British mass market film maker and sleaze baron. This is not to be seen as a derogatory term. Far from it, he would have laughed as he was often known to do. The reason I say this is that Winner knew how to get bums on seats and breasts on celluloid. This film is a Camp, hysterical delight and it shares much of Winners obsessions with class, sex and violence. It delights in its vulgar silliness by making the wry smile of its creator felt. The way to look at this film is simple, it is Winners attempt at Pasolini. I mean by this the translated version of the Canterbury Tales but with some additional sexual sadism and less thrillingly challenging. 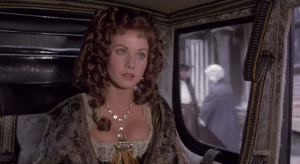 So visually it is all about the titulation and the bawdy. The flat tones and the famous whip scene add little to expand this but the film delights in simplicity. Acting is absurdly awful, Dunaway is terrible and like a bitch in heat. Bates is playing it as a send up but cant stand up, Elliot is playing it as a serious piece and markedly too strict. The real stand out performance is that of Gielgud as the bible bashing valet. The sad thing is the disc is bare. Empty like the chest of gold for Barbara.