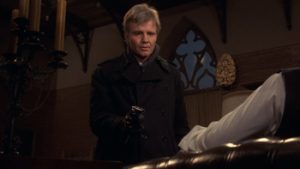 ‘The story is utter nonsense’. Historians said this as Fredrick Forsyth novel was released. Be that as it may, the film shares an idea (as writer Carmen Gray explains) with a later best picture winning Hollywood film. The idea is simplified as that of the Good German. Given agency to change the international image of a country and her people. One film treated us to a German hero. This film treats us to the Odessa and German legacy. As Fassbinder and the German New Wave proposed, the roots of the war generation lay deep. 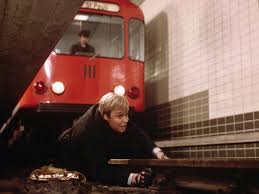 Peter Miller (Jon Voight) is a head strong Journalist working freelance in Hamburg. He stumbles onto a document from a former concentration camp inmate who has committed suicide. The document is a diary of his camp life and a detailed document of the atrocities he witnessed.  The SS commandant Eduard Roschmann (Maximilian Schell) is the architect of the camp and the horrors. It appears he escaped capture after the war and with the help of ODESSA (an organisation of former SS soldiers), created a new life. In the diary it appears to suggest he is in Hamburg. Miller convinced that he is, sets out to find him and unravel the ODESSA organisation.

I cant say that I was bowled over by the film. Pacing issues and historical disregard left me a little cold. I liked Voight in the film. He is always solid and adds textures to a role. It just felt he was within a film which often felt directed by the numbers. It lacked urgency or measure. Be that as it may, if you are reading this, then you want the skinny on the Blu Ray.

The 2K transfer looks frankly wonderful. I have seen the DVD (after watching this) and it seems to have been lifted from a VHS print. This Blu Ray has gone back, tightened up the light leakage and the fuzz. Their are no commenteries per sa. There are two BFI interviews. Neames interview runs over an hour and delights in talking about Judy Garland. She was not a monster and didn’t chew up her directors. On Odessa it seems he is conscious of action scenes and there detrimental effects on the viewer. 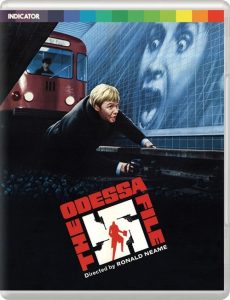 The second is Oswald Morris. I really enjoyed this interview. Morris is funny and insightful. The people he has worked with and how Fiddler on the Roof launched him into making some great films. His notes about certain directors is fantastic. The real highlight for me was Vic Armstrong on the film. He mentions the changes in stunt work…This will make you think of how it has evolved from silent film to ODESSA and now…