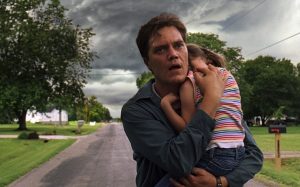 The Cassandra complex has often been used in cinema to explore how we consume narrative and character. Jeff Nichols seems to depend on this for TAKE SHELTER. Curtis (Michael Shannon) is plagued with visions of a great storm. The storm destroys everything in its path. After this he wants to build a storm shelter in the garden. This costs time, money and even his job. His friends turn against him and his wife Samantha (Jessica Chastain) and daughter Hannah (Tova Stewart) are caught up in this. But is it delusion or is it reality?

Cassandra was met with this. Visions of the future and scorn of those she told. Shannon character befalls the same fate.
The film succeeds because of its cast and fails because of its directors excess. Nichols needs to understand that pacing is critical. The film is simply too long. It is bloated with filling and takes do over run or shots  are inexplicably held for too long. This adds at least 20 minutes to the film that could have been exercised. Its however still holds up and its success is that the cast allow the flow of the story to remain uninterrupted.

Even in spite of this excess length. Shannon performance ebbs and flows subtly. He balances how much his mothers mental health issues that undermine his visions with the visions. Is he unstable or prophetic? Because of him (and Chastain) you stay with it. You hold on to see what might be the case. Not to spoil it but it remains for you to decide if and what it is that is being seen. 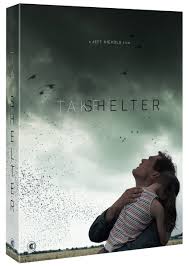 The extras, well that box is a thing of beauty. The care taken with this, the wrap around picture and that font are lovely. The disc extras peak with the Q and A with director and star. Shannon delves into the films performance and Nichols actually comes across as a director of nuance and reach. His film lacks some of this.