Andrew Bujalski SUPPORT THE GIRLS, follows on from his previous films COMPUTER CHESS and RESULTS. Not in the whole ‘mumblecore’ thing, that I think is a misnomer. More it follows the clever comedy and subtle observance of people just living in a moment. As others have phrased it, ‘slice of life’. One day. Multiple lives. Delving into the highs, lows, meals and moments of women in the American heartland. 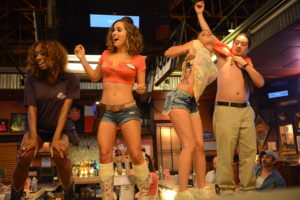 Regina Hall gives a standout performance as Lisa Conroy, a bar manager of a breastaurant called Double Whammies. On her payroll are waitresses, acting as a cross between Pizza Hut servers and Hooters trainees. Cooks with cousins who steal and cleaners. Her boss, Cubby (James LeGros) is idle and obnoxious. However his business can’t survive without Lisa. When her employees host an off-the-books car wash to raise money for another employee, Shaina (Jana Kramer), it could be the end of something. Else it might be the beginning of a new life for them both. 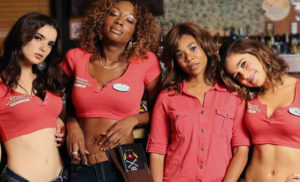 Regina Hall is what makes SUPPORT THE GIRLS work. I knew she had range. I could see she was more than the cardboard cut out of her previous roles. So it seems did Andrew Bujalski. He has a knack of working out people and roles. He also gets how an ensemble works most effectively. He knows that a core has to be created. It has to centre the performances. This is where Hall comes in. 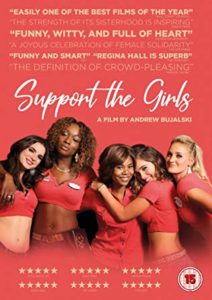 She plays Lisa with a richness of sense that balances her comedic skills, with a seriousness. I have to say that I am astonished it took so long for people to work this out. She layers the role with emotionality. She captures vulnerable, she nails tender, she even edges hard but not as abrasive but as standing tall. I was drawn in by her performance. I was drawn in and then connected with the ensemble. All in all, it is a great film.