“One of Jancsó’s masterpieces – perhaps even his best film of all – and totally unlike anything else in cinema” John Russell Taylor. Miklós Jancsó’s Silence and Cry is a journey film that takes the horrors of totalitarianism and focuses it into an event. A journey through a fleeing soldier, who is escaping the anti-communist purges that exploded during the short lived Hungarian Soviet Republic of 1919.  We navigate within a village that is small minded but communal spirited. Families are frightened of the repercussions that may come from harbouring a criminal. They are frightened of the questions coming from the police and the armed services. Violence is not unusual. Violence is also metered out to frame others of a crime until they speak. Until they tell where the man is.

Miklós Jancsó’s Red and the White is a sensational feast of breathless visual movement and the microcosms of events. Silence and Cry has the same visual pace, following from event to event. Using long takes, it compresses the movements and makes them often very diabolically tense. Tracking the escapee from his safe haven to the tracking force that is determined (and also colluding with) them to find this man.

However unlike the fore mentioned, Silence and Cry lacks that momentum and reach. The events often are understated, logically this is to reflect how events often are so but it hurts the films development. We are caught in a cycle that breaks and starts, breaks and starts. This disconnection and re connection troubles, as the search spirals. The camera keeps pace wonderfully, tracking the police, villagers and fears but it is over a distance. It makes the overall effect weaker and unlike Red and the White, it doesn’t hold up to reexamination without the unease feel that you are not feeling this. Empathy is one charactoristic of his work that I connected with. Here it became confused.

To the film transfer and 2K does some justice to that black and white cinematography. The cinematography which wonderfully captured movement and motion, without stutter and with smooth glides and tense tracking shifts. It becomes lush and lucid for this is what it was and had been but on VHS it was not clean nor controlled. The tracking surrounds look filled with life and fear in equally measure.  The cinematographer János Kende has allowed for it to speak for itself and that is a real boost to the viewing pleasure. Tony Rayns piece helps us understand the films place in history but I have to complain here. New voices, fresh ideas and people who do not have that legacy of informing a generation already about film. 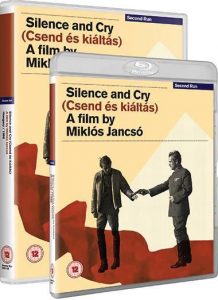 The camera keeps pace with the

The final part of an epic unofficial trilogy, following The Round-Up and The Red and the White, the film explores the cruel mechanics of oppression and resistance within the family, and how they echo the political turmoil that rages outside. The brutal beauty of Silence and Cry reveals the terrible impact of tyrannical power, politics and history.

Second Run presents Silence and Cry from a brand new HD restoration of the film, created by the Hungarian National Digital Archive and Film Institute, supervised by the film’s cinematographer János Kende. The Blu-ray and DVD editions also include Miklós Jancsó’s renowned but rarely-seen ‘Jelenlét’ documentary trilogy of short films, plus a new essay by film historian Tony Rayns.