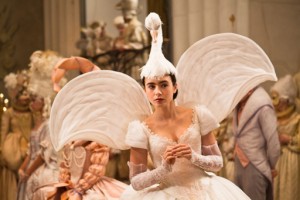 Tarsem Singh‘s spin on the Snow White story, Mirror Mirror, got something of a critical panning on release, with critics quick to dismiss it as frivolous and empty. Yet there were a few voices dissenting from the majority: those who came away from the film surprised by it’s lightness and charm; those who enjoyed the bizarre, fantastical aesthetic; those, perhaps, who got it. For whilst the complaints levelled against the film undoubtedly have some basis in truth – this is indeed a frivolous, daft affair – Mirror Mirror is an exquisite telling of a well known story, bringing something old and familiar into a beautiful new light.

For the Snow White story has changed very little, here. We still have a wicked step mother, a dashing prince and a pale naïf locked up in a tower; it’s yet another European fairy tale setting full of American voices. Yet what separates Mirror Mirror from any Huntsman, Red Riding Hood or anything else that tries to make fairy tales dark and gritty (one dreads the upcoming Hansel and Gretel ‘reboot’) is that this is a film that is aware of its own genre. Instead of re-adapting the admittedly dark story by the Grimm Brothers, this is much more a live action version of all the classic animated fairy tales we grew up with, and it positively embraces that fact.

Primarily this is done through visuals, and Tarsem (here credited by his full name, Tarsem Singh Dhandwar) revels in the freedom afforded to him by the aesthetic possibilities of a world full of cliff top castles, mysterious wood dwelling beasts and sumptuous parties. Not constrained by any attempt at gritty realism, the director crafts a world of glorious, illogical beauty with eye popping costumes (the animal-themed ball a particular highlight here) and production design that is as indulgent as it is impressive. The standout scene is undoubtedly the animated opening of the film, relating the back story through the medium of ceramic puppetry, featuring some stunning transitions and some haunting images. It is a breathtaking way to start the film, and the rest is still one of the most visually impressive films of the year so far.

Yet beyond the visual elements, there is a humour and an inventiveness that courses through the film, further cementing its setting in the world of make believe. The Queen’s vanity, and her obsession with her reflection, takes us to a world within her Mirror – she is literally absorbed by her own appearance. And when she needs to dispatch her step daughter, she employs a form of puppetry that defies the reviewers who claimed this film contained no originality. Even the big bad beastie at the end – a winged dog-snake-dragon – is so out there and so clearly unreal that every moment in this film feels like the imaginations of thousands of children brought to life. Yes, it’s not got a lot to say, but this is childhood dreaming given cinematic form; the closest thing to a live action animation there is.

Winning performances from Armie Hammer and Lily Collins, as well as a group of seven dwarves that are fleshed out as well as funny, mean that the film is very heartfelt, whilst a script peppered with some brilliant throwaway lines makes it consistently amusing too. Yes, there are definitely issues. Not all the jokes hit home, and some of the dialogue is a little tin eared. Some viewers may be put off by just how darn sweet everything is. But Mirror Mirror is nonetheless a charming, witty and beautiful version of much loved story, full of warmth and vibrancy. It’s also a refreshingly wholesome and happy antidote to an industry that seems determined to make everything darker. Take a leaf out of Tarsem’s book: embrace the colour, joy and silliness of fairy tales. That’s how Snow White should be.

Extras: A making of doc that is notable for the lack of any input from the director, as well as an awful skit narrated by an obnoxious child about puppies watching Armie Hammer play a puppy. For a film this visually inspired, it needed far more about the production design rather than a few love-in quotes from actors and producers. Also, given how Tarsem’s long time collaborator and costume designer Eiko Ishioka died in January of this year, it seems a shame that there was no separate extra dedicated to her marvellous work.