Edward Zwick – director of Defiance and The Last Samurai – has decided to step away from the action to direct a Rom-Com. Romance films are often a prime opportunity for studios to make money quickly. The reputation they have for being churned out with no real thought put into them can hold many people back. Zwick does, however, have a lot more to offer than many. This is surprising considering his lack of experience in making romance films. In the style of When Harry Met Sally, the story can appeal to both men and woman because of the mixture of comedy and romance. 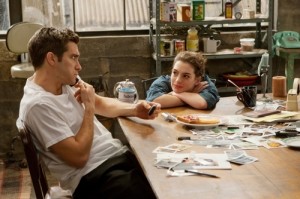 Jake Gyllenhaal is Jamie Randall, a ladies man who can get any woman he wants and uses this to his advantage in both his work and social life. Anne Hathaway is Maggie, a Parkinson’s sufferer, who is playing hard to get. The chase expected in a film like this is minimal, Jamie does not have to work too hard, but he suffers when Maggie keeps pushing him out of her life. There appears to be no holding back anymore in Hollywood romance films. Gone are the days of the big Hollywood kiss; Maggie and Jamie are in bed together in the blink of an eye. Sometimes it just seems like an excuse for Hathaway to be topless and Gyllenhaal to show his abs. It is refreshing, however, to see a couple not get together within the first five minutes. Zwick takes a more mature look at relationships than many directors would. Gyllenhaal’s character learns a lot in the film about his relationships with women and how inconsiderate he has been in the past.

There is good chemistry between Gyllenhaal and Hathaway. Gyllenhaal often seems more charming when he doesn’t overdo it; such as in Source Code and Donnie Darko where he doesn’t make the effort to be likeable. Hathaway’s portrayal of a Parkinson’s sufferer is superb and she highlights the impatience and frustration of her character perfectly. Zwick addresses the impact of illness on people’s lives and the influence of drugs in society. At times though, the film is nothing special; even if it does have more to offer than most Rom-Coms. It will eventually become lost under the great pile of romance films churned out every year to make a quick profit.

Love & Other Drugs is charming and addresses the problems faced by Parkinson’s sufferers; giving it the moral value which exceeds many of its kind. It’s not a straight-up comedy but there are a few good laughs. It becomes difficult at times to understand where Jamie and Maggie stand with each other but they are a good couple and are very likeable in their own quirky way. For romance fans it will satisfy but not necessarily stand out as a great genre piece.