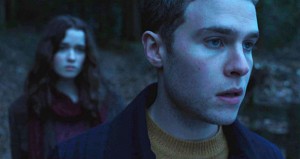 As Tom (Iain De Caestecker) and Lucy (Alice Englert) begin their labyrinthine drive around the woodland tracks towards their unseen hotel, the camera suddenly lurks in the trees themselves, the threat immediately made human. It’s a surprisingly early play for In Fear, which has been relying more on the awkward tension of the new couple and the eerie blankness of their deserted surroundings. From the moment the lens darts naughtily behind a branch, the film is infected with a different energy, one that gradually overrides the initial nervous creep of the simple situation.

A phone message plays over the opening credits. Tom invites Lucy to a music festival in Ireland, despite their only contact having been a flirtation in a bar. “Bring your friends,” he adds awkwardly, already setting the deferential, puppyish tone he adopts in their relationship, “if you have any.” Roll camera, and they’re two weeks together, a proper couple in the flush of eager, nervous love. A mysterious frisson in a pub – seemingly incidental, but In Fear is so tightly conceived that every detail is integral – and then they’re following a van to the hotel Tom has surprised Lucy with. After ten minutes of following the signs to the hotel, they start to suspect something isn’t quite right. As night approaches, Lucy’s fear begins to reach fever pitch, and a literal run-in with taunting local Max (Allen Leach) twists the pitch black landscape into something even darker.

In Fear works from strong foundations. The simplicity of the situation allows character to drive the film, and writer-director Jeremy Lovering gives a familiar intimacy a fresh angle, using the natural tenuousness of their romantic connection to create a horror story where the emotional investments of the characters form the foundation of the entire narrative. It’s an unusual approach to a genre that so often places scares above character, and one that makes for an experience instantly more involving and gradually more frustrating than your average horror movie. 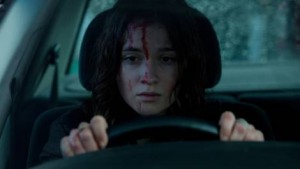 De Caestecker and Englert are effectively naturalistic in the film’s initial stretches, the former appealingly capturing Tom’s eager enthusiasm and obedient literalism, the latter a more inscrutable, melancholy presence. “How can a field be sad?” Tom asks of her early observation, underlining the difference between them. The audience lives in the car with them for a large part of the film, jointly fearing the darkness encroaching upon them as both characters and audience subscribe to traditional notions of fear. In Fear scares by nature of its characters sheer ordinariness – which is why the final stretch of it feels lacking. The actors worked without knowing the ending of the story, but that doesn’t prevent their acting becoming increasingly histrionic as the somewhat incomprehensible truth is revealed.

The final passages of the film lapse into a generic mode – not taken from horror but from a grubbier kind of vengeance thriller, and the shift doesn’t really wear well. Lovering is clearly leaving the audience to draw their own conclusions from a selection of clues and suggestions, but the solution we’re led to isn’t nearly as emotionally coherent as the dynamic between Tom and Lucy had been. As the believability slips away, the fear dissipates, and the dominant feeling becomes instead one of frustration.

The DVD and Blu-ray release comes with an entertaining commentary from the director and his three cast members, reminiscing over the genuinely fearful experience making the film – something also covered by the lengthy Behind the Scenes documentary. Playing over a still logo, Roly Porter’s ‘Music from and inspired by In Fear‘ is an eerie if not particularly original piece. It’s rounded off with the strong trailer – enough enticement for any horror lover – and a rather unthrilling stills gallery.