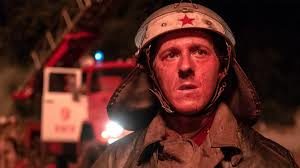 As you come to this TV series, you will bring with it baggage. Either from your remebrance of the actual events, press coverage of the series claiming it to be the greatest ever or the mounting war of words between the series producers and Russia over factual inaccuracies. I want you to discard all this. The press coverage is very much to be expected. Its arbitrary and unhelpful. What does best series ever mean? Better than THE WIRE, across its whole fluxactions? Better than EDGE OF DARKNESS and it political punch? Better even than TINKER, TAILOR, SOLIDER, SPY? A ludicrous statement and one to discard. The Russian noise, is just that. The belief of American involvement is for Russia (lead by a former KGB agent and man of many dubious acts). The greatest chronicler of Soviet Russia, Svetlana Alexievich work CHERNOYBL PRAYER is to be read here. It has become hidden within this and that is a shame. Its a master work, thourghly researeched (like the series) and if your interest is spiked by the series, move here. 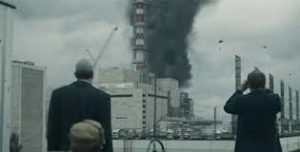 On April 26, 1986, the Chernobyl Nuclear Power Plant in the Soviet state of the Ukraine, suffered a meltdown and this caused a massive explosion. Releasing radioactive material across Belarus, Russia and Ukraine (as well as Scandinavia and all of Western Europe.) Valery Legasov ( Jared Harris), is deputy director of the Kurchatov Institute. He is brought in to aid cleanup efforts. Boris Shcherbina (Stellan Skarsgård) is the Council of Ministers’ deputy chairman and a hero who deserves credit far beyond what he recieved. He stands up to the party and tells the truth. They are supported by  Ulana Khomyuk (Emily Watson), a nuclear physicist from Minsk. She establishes the broad sweep of nuclear exposure and decides on getting the message out. 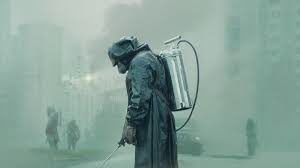 So now discarding all of the prior influences, you get to the bare bones of CHERNOYBL. You can see it is a rich, dense, clear appreciation of the event. From the extrapolation of censorship, party control and information pooling. To how Gorbachev viewed the event as an international event, then evaulating the wide ranging effects. Some of these are not factually based, like the bridge of death. Or are timelined incorrectly, like the helicopter crash. However within the CHERNOYBL TV series, we have a chart of the events in itself, as a historical text. Drenched in history. Pieced together with nuanced performances, narrated with stories that are persoanal and often problematic (even if some are an amalgam of the events and people). 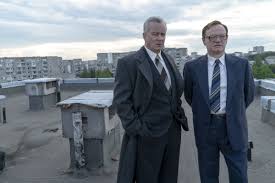 Director Jonas Renck (The Walking Dead) has a lot to be creditied with as well. He cages the series. This creates a tension that sometimes is stomach crunching. He also drains the colours, saturates the piece in decay and detritus and finishs it all with a punch. Let us be honest here. It makes for a hard watch often. My only hostility in the piece is that it sometimes avoids establishing the context of things prior to the event. The push for development in Soviet Russia. The shift of the state after Perestroika and glasnost. These were pivotal to why and how it happened. Why the Ukraine will have a section of its nation, inhabitable. Why we delight in the strangeness of the town of Pripyat. It also makes for an informative, developed piece. A piece that will certainly live on. I fear however that this is a rare gem. I also fear it will over shadow some of the superb written work on the event and its long term issues.