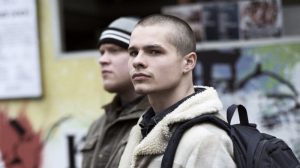 The original Romper Stomper film underlined a distinct growth in the Neo Nazi movement in Australia. It was unsentimental and often challenging to watch. It wanted the audience to feel responsible for the action, without giving them an easy out. The series thankfully keeps much of the challenging content but leaves the unsentimental aspects aside. 25 years after the original film, an emerging youth movement is embracing far right ideology. The group of choice is Patriot Blue and two friends Kane and Stix fall into it after rescuing racist Blake Farron. Farron is at a rally that is taking place at a Halal meat festival. They are confronted by the anti fascist group Antifasc. Blake wants revenge and sets out to draw in the two boys and spill the blood of those who challenged his ideological stance.

The issue often with squeals to originals which are popular and innovative is not in their written structures. It is more often due to two things.

One – that they are dull, leaden because of that core from the past which they cant shake.

Two – they try to benefit from inputting ideas that can corrode ideas and themes still potent. 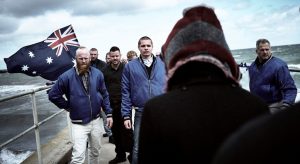 In Romper Stomper the TV series we are lucky. Those behind it have realised that the films power, was its frankness. They have then kept that and allowed the message to be clear and direct. The series has simply (and effectively) progressed a story to keep it relevant but not dispatched with the very potent content beneath. The very textures of racism is dealt with often as frankly as the film but with less explosive violence and more analysis of those executing the feelings and political positions. This means that we explore character rather than just watching violence. We are also given a timely infusion because of this. We find that what is going on in the US or India can be linked back. Ignoring nothing of the problems that are deeply in most Western countries about immigration and identity.