Set in Paris at the turn of the 19th century Casque D’Or is a film about a group of men crippled by a thirst for power, for vanity, for money, and for love. More than that, it’s about the one lady in their midst who affects them all, Marie. 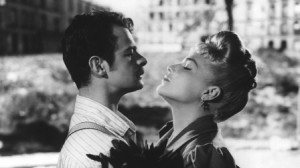 Simone Signoret plays Marie, an infuriating character who seems to flit between her suitors like a butterfly unsure where to land. But she is a modern woman pushing back against the dominant men, determined to assert herself, to climb above her role as gangster’s moll. As the story unwinds we gently get under her skin and can’t help empathise with this platinum blond stuck in the filth of the underworld.

What starts as a gangster film gradually shifts into romance. Serge Reggiani plays Georges Manda a reformed convict who falls hard for Marie. His is a quiet presence, aware of urges both criminal and sexual but always restraining himself – the stolid moustache giving nothing away even when we see the turmoil in his eyes.

Director Jacques Becker has a rare gift for focusing on the essential in every scene with a gentle ease that gives Casque D’Or a weightless feeling. We are caught in a dance with Marie just like the men, in a spin and not ready for the creeping dizziness.

In Becker’s world even when there is discord amongst the characters there is a calmness to his gaze, as if he is looking upon the frailties of man with a weary but sympathetic eye.

You can see the influence of this film on later gangster dramas as in the scene where Georges and the audience are introduced to the gang and their respective nicknames that surely provided inspiration for Scorsese’s Goodfellas. There is also an edge to the sex and violence that (as with Rififi) sets this apart from its Hollywood equivalents.

The quality of the acting, the sparseness of the dialogue, the elegant mix of studio and location shooting mean that Casque D’Or remains fresh 60 years on. As in Noir these characters are resigned to their fate, happy to enjoy the ride and dance a waltz, spinning toward the inevitable endgame.