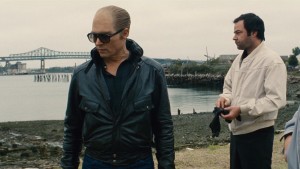 James ‘Whitey’ Bulger was a gang land boss and head of the Winter Hill gang. They operated at a time when mob violence was at its peak in the 70s. He had to compete with the ever present Italian mob. Thanks in major part to the FBI, he eliminated most of the mob in the area that he had to compete with and ended up ruling South Boston with an iron fist. By working within an alliance, Bulger and the Winter Hill gang were unstoppable. Then after this all came out, Bulger disappeared and wasn’t found until 2011. 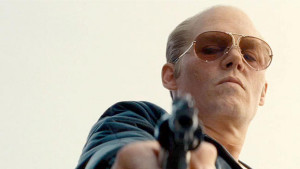 This film is a varied beast in many respects. Depp is excellent and adds menace and a demonic persona to a very nasty creature. Visually as well he looks the part and gives an Oscar nominated worthy performance. The problem is that the film falls down around him and Rory Cochrane, who gives a great balanced performance. The rest of the cast come across as to starred. They play it for kicks and this means that scenes devoid of either two become bland and simply shouting sessions. Also the cast are obsessed with prior gangster films. Some act like Pacino others like De Niro. Then you have Cumberbatch who plays himself with a dull Boston accent.

Then we have the tired visual compositions, lazy soundtrack and of course the rather flat palette. It all mixes together to make a great performance within a boring film, even greater. It also makes me saddened for Depp who probably hoped for a great feature and found it was another, should have been made for television film. The Blu Ray has a few extra bits that might be of interest. In my opinion the film is not really worth a watch.