Arrietty is the latest offering from the prolific Japanese animation house, Studio Ghibli. Thankfully it is just as magical and beautiful as the previous offerings from the studio.
Home
DVD/Blu-Ray

Arrietty is the latest offering from the prolific Japanese animation house, Studio Ghibli. Thankfully it is just as magical and beautiful as the previous offerings from the studio.

The film is based on the novel The Borrowers written by British author Mary Norton, but set in a modern day Japan. The story follows Arrietty a young girl-borrower who has just come of age to begin learning her trade as a borrower and Sho a young boy who having fallen ill has been relocated to his grandmothers house while he awaits his surgery. On Arriettys first borrowing mission she is seen by Sho, causing her family to become even more cautious. But Sho is friendly and only wants to help the Borrowers, unfortunately Haro the house caretaker catches wind of the Borrowers and drama ensues. 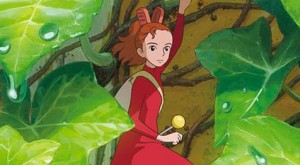 Directed by Hiromasa Yonebayashi and produced by Hayao Miyazaki. Yonebayashi makes his directorial debut here having been a long standing member of Ghiblis animation team, and he does a magnificent job, although there is no doubt that Miyazaki, now 70 years old, had more than his share of influence over the project.

The film itself is not a story as epic as some of Ghiblis previous projects, but don’t let scale deceive the film is artistically magnificent and is written in a way that truly warms the viewer to the characters, its slow pacing is to its credit giving the audience time to soak in the magnificence brought to what is ostensibly a mundane environment.

The DVD extras are fairly standard, containing a recording of the song written for the film, a fairly extensive interview with Hayao Miyazaki and another with the director Hiromasa Yonebayashi who also shares some of the concept art. For those who choose to watch the film in the English dub instead of its original Japanese the U.S dub cast are interviewed as well. There are also numerous trailers availible.

In all the film is Studio Ghibli at its best, enchanting and breathtaking, moving and entertaining, the DVD extras may not be outstanding, but the film is and is a must have for your DVD collection.