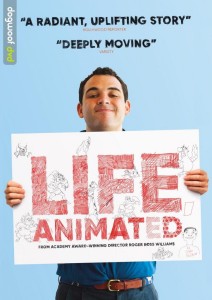 DOGWOOF is delighted to announce the UK Home Entertainment release of LIFE, ANIMATED, the inspiring and heart-warming story of Owen Suskind, a young boy with autism, and how the world of Disney helped him learn language and to make sense of the world around him – bringing him back to the family who feared he was lost to them forever.

Directed by Academy Award® winning director Roger Ross Williams (God Loves Uganda), adapted from his close friend Ron Suskind’s best-selling book – Life Animated, A Story of Sidekicks, Heroes and Autism, the film follows a seminal year in Owen’s life. Looking back at the transformational journey that took him from a silent, withdrawn, physically challenged young boy, to the confident, independent and loving young man he is today, the film shows how a love of Disney movies brought him back into the world; making friends, growing up, graduating, and falling in love for the first time.

Premiering at Sundance, where it won a Directing Award for Roger Ross Williams, Life, Animated has been released worldwide to an enthusiastic reception from critics, awards bodies and organisations working with and researching autism.

We have 2 copies of the DVD to give away.

Which award did Life Animated win at Sundance Film Festival?