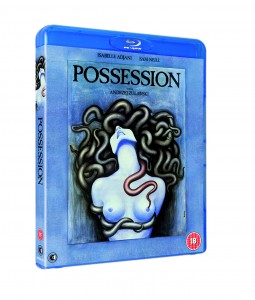 A horror film like no other, Possession, directed by Andrzej Żuławski, is an intense shocking experience that was originally banned in the UK on the notorious ‘Video Nasties’ list. Now this hugely controversial film makes its long-awaited Blu-ray debut courtesy of Second Sight Films.

With their marriage in tatters Anna (Adjani) and Mark’s (Neill) tense relationship has become a psychotic descent into screaming matches, violence and self-mutilation. Believing his wife’s only lover is the sinister Heinrich, Mark is unaware of the diabolical, tentacled creature that Anna has embarked on an affair with. The unhinged woman visits her monstrous lover in a deserted Berlin apartment and will stop at nothing to protect him.

Possession was originally released in what year?