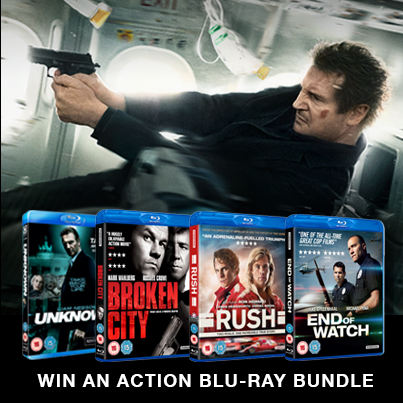 Up for grabs this week, we have an awesome Action Movie bundle.

The pack contains 1 copy of each of the following action films:

Unknown (2011)
Starring: Liam Neeson, Diane Kruger
A man awakens from a coma, only to discover that someone has taken on his identity and that no one, (not even his wife), believes him. With the help of a young woman, he sets out to prove who he is.

Broken City (2013)
Starring: Mark Wahlberg, Russell Crowe
In a city rife with injustice, ex-cop Billy Taggart seeks redemption and revenge after being double-crossed and then framed by its most powerful figure: Mayor Nicholas Hostetler.

End of Watch (2012)
Starring: Jake Gyllenhaal, Michael Peña
Shot documentary-style, this film follows the daily grind of two young police officers in LA who are partners and friends, and what happens when they meet criminal forces greater than themselves.

We have one Blu-ray bundle of 4 movies to give away!

Which Liam Neeson film is set in Paris?

a) Taken
b) The Phantom Menace
c) Batman Begins