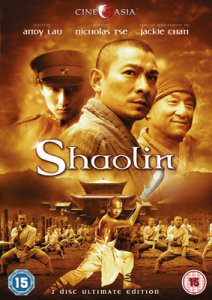 Following Young Bruce Lee and Detective Dee and the Mystery of the Phantom Flame, Cine Asia‘s latest DVD and Blu-ray release is a 2 disc edition of Shaolin. Directed by Benny Chan from an original screenplay of Alan Yuen, the film – contrary to what many online sources note – is not a remake of the 1982 film Shaolin Temple, which starred Jet Li.

Shaolin is a gripping, well-paced and superbly choreographed martial arts film with action choreography by Corey Yuen, who directed The Transporter and choreographed the action scenes in its sequel; other credits in the same role include X-Men and Romeo Must Die.

Set in the Republic of China in the 1920s, Shaolin stars Detective Dee‘s Andy Lau as General Hou Jie, a warlord who amasses wealth through the violent subjugation of his people. Nicholas Tse is Cao Man, Hou’s immediate subordinate, who tries to influence the General into purchasing machine guns from the Russian army so that they can oust Hou’s ruthless brother. When Hou refuses, Cao conspires against him and his family and usurps him for the position of General himself.

Exiled, injured and wanted for a bounty, Hou seeks sanctuary in the Shaolin Temple he dishonoured at the film’s opening. Under the tutelage of the temple’s long-time chef, Wu Dao, played by Jackie Chan, Hou Jie is eventually invited to train with Senior Brother Jing Neng (Wu Jing) and the other monks, whose Buddhism he slowly adopts, before a final showdown with protégé-cum-traitor Cao Man. (Read on after the screenshot.) Central to the narrative is Hou’s personal transformation, from ruthless warlord to courageous, self-sacrificing Buddhist monk; Lau excels in the role and gives it a compelling depth that also pays testament to how the film as a whole isn’t simply a martial arts actioner. A scene in which he defers grief with violent threats is particularly powerful, and the exhaustion he betrays in subsequent scenes is convincing and poignant; he shares a fine chemistry with Jackie Chan, as well as with Wu Jing.

As director Benny Chan notes, “Contrary to popular belief, Shaolin Temple does not train people with martial arts so that they could go out and fight each other. Even when pushed to defend themselves, Shaolin disciples still hold on to their somewhat pacifist beliefs.” There’s a duality present throughout the film, then, that has on the one hand an aggressive means of domestic control from above and the aestheticised choreography with which the monks defend themselves against it.

Parallel to this tension and heightening it is one more historically specific: that between traditional martial arts combat and the unmatched killing power of firearms. Indeed, that scene early in the film in which Hou refuses to buy foreign machine guns – and thus setting up his own betrayal – foreshadows the horrific and hopeless climax. It also challenges any elevated and/or romanticised expectations of martial arts’ practical and physical limits.

The film matches this subject matter with a well-balanced aesthetic between on-set explosions and CGI; the latter is used as a means of assisting the former, and ensuring safe in-scene choreography that still allows for lucid visual framing.

The set-pieces are terrific. There’s a welcome smoothness to crane shots that imbue a fitting calmness when things become more incident-heavy, and lightweight cameras accommodate much clarity and directorial variation. Some of the tracks through the constructed set in the climactic sequence are beautiful – and brief, too; little fetishization here.

As ever, Cine Asia provides a handsome 2 discs that include an optional English dub; trailers and cast and crew interviews; a making-of gallery and many behind-the-scenes featurettes. There are two extras exlusive to the Blu-ray release: ten deleted scenes, and a featurette called “Shaolin Wushu in Action”. As with previous releases, the most useful extra is the optional audio commentary by Hong Kong cinema expert Bey Logan, whose knowledge is insightful and whose enthusiasm is infectious; he provides more names and information for the film than its IMDb page does, which is telling of how woefully marketed and under-distributed these kinds of films are in the west. Another welcome addition to Cine Asia’s growing catalogue.

Shaolin is released on DVD and Blu-ray on September 12.