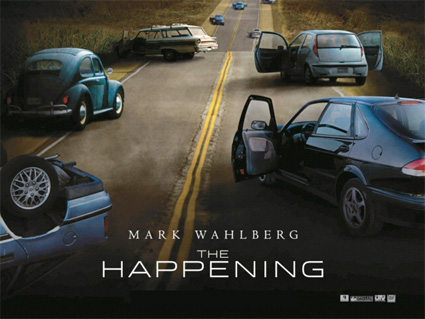 This film has received pretty bad press but its unjustified in my opinion. Its no masterpiece but its a very enjoyable film and gives enough plot twists to keep you pondering.

The Happening begins with a strange scene in Central Park, New York. All the people there seem to start acting strangely all of a sudden, the screams begin, one woman sitting on a park bench stabs herself in the neck with some sort of hair pin… people start jumping from roofs. You are of course left wondering why – but it all adds up to some sort of mass suicide.

The initial suspicion is that its is a terrorist attack and some form of airbourne toxin has been released on the public and the effects are causing people to do themselves in. Its not… but what is it?

The central character is ‘Marky’ Mark Wahlberg and lets admit, hes not the greatest actor thats ever lived but he’s certainly not the worst. He plays Elliot Moore – a science teacher who inevitably tries to diagnose and solve the strange occurrences.

There are some terrific and graphic action scenes. I liked it, there are some truly jumpy scenes which are pretty rare in horror films these days. Watch out for the trees!

Its written and directed by M. Night Shyamalan, who found fame with ‘The Sixth Sense’ and probably his best other effort ‘Unbreakable’, there has been a few stinkers, such as ‘Signs’ but this a much better attempt. Well worth checking out.