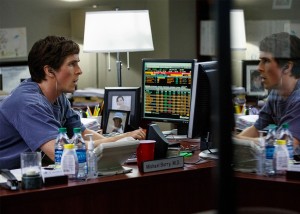 Almost as if The Wolf of Wall Street and 99 Homes had a child that wanted to show off it’s intelligence in the corner of a room, The Big Short is Adam McKay’s adaptation of Michael Lewis’ book on the lead up to the biggest financial crisis in American history. Following three stories about finance workers who figured out that America was working towards the collapse of the credit and housing market and what happened when they decided to bet against the housing market with the banks – would they end up winning, meaning the general public would lose because of recklessness and greed?

Featuring a cast of some of the best American actors working today including an absolute star turn from Christian Bale as well as Ryan Gosling, Steve Carrell, Brad Pitt and Finn Wittrock, The Big Short is a fast paced, sometimes quirky, often difficult watch about the a crisis that affected the entire world and rocked the finance world more than any other time in history.

Bale stars as Michael Burry, an ex-physician turned Scion Capital hedge fund manager with autonomy to do as he wishes with the accounts he managed. He worked out from the numbers that he was seeing about the gradual decline of the credit industry and worked out that by shorting or betting against the mortgages (ie. people will have to stop being able to pay) he would end up making a whole lot of money for his clients. Whilst no one believes what Burry has suggested and with all his clients sending angry emails in droves, he forges on with all the major banks. 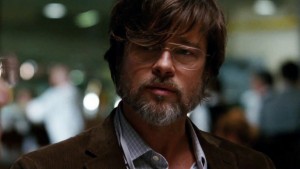 ridiculous suggestion. He wants to make big money and after a wrong dialled number to FrontPoint Partners, Vennett along with Mark Baum (Carrell) and his associates (Rafe Spall, Hamish Linklater, Jeremy Strong) join together and discover that many mortgages are overrated by bond companies. Vennett and Baum don’t necessarily trust each other and are coming at this from different angles; whereas Vennett wants money, Baum believes that this is his chance to bring down and highlight the corruption in the industry after a personal incident. Finally, Charlie Geller (John Magaro) and Jamie Shipley (Wittrock) are small fish in a big pond and when they get hold of Vennett’s prospectus by accident, they want in. But they have to call on an old friend, Ben Rickert (Pitt), a retired banker to help get them involved.

These three groups are therefore working on the basis that the banks don’t know what is going on, which is really wonderfully illustrated during the montage where Burry visits various banks to explain what he is looking to do. They laugh and smile and are more than happy to take Burry’s money. If the banks don’t know, then the general public will have no idea and for these deals to work out in the advantage of Burry, Vennett, Baum etc, they will have to bet against these people as well as the banks. Some find this difficult and others not so much. 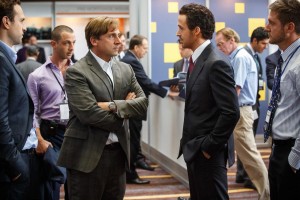 What McKay doesn’t shy away from is financial lingo – audiences will have watched for years now on 24 hour news cycles what went wrong with the system and may even understand some of the terms themselves but The Big Short doesn’t take any prisoners. It does explain the jargon before returning back to the story, but if you miss this, you are forced to catch up yourself. These explanations are very memorable as the characters often break the fourth wall to jump over to someone else for an explanation; Margot Robbie in a bathtub, Selena Gomez in a casino or Anthony Bourdain in his kitchen – they are fun and offer light to a very serious film in the same way that Scorsese did in The Wolf of Wall Street.

The chemistry between this set of actors sets the screen alight, especially Carrell and Gosling (reunited after Crazy, Stupid, Love) who bounce off of one another and are able to jump between serious drama and slightly surreal humour within the same scene. But Bale is the stand out within The Big Short, rarely being outside his office (except for an exceptional scene on a drum kit), he is able to fully appreciate the gravity of the film by keeping calm and making the audience smile as well as tremble. He is subtle and superb.

The Big Short is a masterfully told but not a straight forward watch, it’s well put together and the layers of the story slowly come away one after the other – but this may not be one for everyone.