*Note, there are some spoilers throughout this review, but really, I wouldn’t worry too much – dance with a chicken instead! 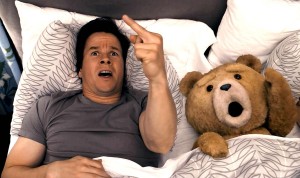 As someone who wouldn’t count themselves as a Family Guy or American Dad fan, I was somewhat skeptical about the release of Ted because I wasn’t sure whether it would just be a continuation of the somewhat childish, inane humour that has made Seth MacFarlane one of the biggest comedy writers of the last decade. Of course I appreciate the sentiment of many of the jokes that are made – both within the show and surrounding it. If you are able to get Mila Kunis to voice the ‘ugly’ girl, then you at least tick the irony criteria for me.

But Ted goes further than the television shows ever have (from what I have seen).

In simple terms, we follow the story of Mark Wahlberg’s character, John, who as a child wasn’t popular or had any friends. One Christmas he is given a toy teddy bear, where upon a magic star he wishes the bear would come to life and be his friend forever. Here starts the magical story of Ted. The bear grows up with John, and ages, mentally like his best friend… Then through a typical montage sequence we fly forward through time where John is now an adult, with very few career opportunities, smoking bongs, living in an upmarket apartment (which he clearly didn’t pay for) and going out with Lori (played by Kunis). Now, although they do explain how the two met, they don’t explain why someone like Lori goes out with John, past, ‘he made me laugh…’.

But ignoring my search for explanation and slight bitterness that Mila Kunis hasn’t yet found me funny, 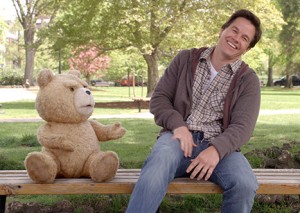 Ted is packed to the brim with jokes and doesn’t give you a moment to work out whether you really should be laughing at what has just been said. The bear, aptly named Ted, grows up with John, smokes bongs with John and even gives him relationship advice (‘Where is my ring, eh!’). One possibly thinks to themselves that they could be on a temporary acid trip during this film, where toys come alive (but this certainly isn’t Toy Story) and discuss trailer trash girls with you. But then again, this is a film brought to you by someone who made random fights with chickens, a reoccuring motif.

To write about Ted, I have found is somewhat difficult. I wanted to like this film as much as I wanted to hate it, but I really did find myself middling with it. There are some hysterical moments, stand out scenes which you do remember after watching including the thunder song (‘When you hear the sound of thunder, don’t you get too scared. Just grab your thunder buddy and say these magic words: “F**k you thunder! You can suck my d**k. You can’t get me, thunder, ’cause your just God’s farts. Pft.’) and a very trippy sequence at a party starring Sam Jones (known for portraying Flash Gordon) but outside of these moments, I was left wondering what the point was. Now, don’t get me wrong, I wasn’t expecting a piece of stunning cinematic history but when you look back on Ted, it seems to be a joke followed by a pause and then joke again… This pattern appears to have worked, one just has to look at the box office revenue for the film.

I could continue to list out the different scenes that made me laugh (the violent fight between John and Ted, Ted flirting the till assistant whilst dancing, the frankly odd stalker Don dancing) but I think it really is for you to go and watch and gather what you think from there. Oddly enough, for a comedy of this calibre, the acting was really quite brilliant. As the script (and without prejudice, the story) hardly contain the meatiest dialogue, the main two (Mark & Mila) actually manage to portray a couple where one is middling and the other isn’t content with this, quite well. There is certainly drama and by the end of the film, you are rooting for them to get back together (c’mon, you didn’t see it coming?). Furthermore, Giovanni Ribisi portrays Don as a hugely frightening character – he follows Ted around and when he is given the chance, ACTUALLY KIDNAPS THE TOY. Truth be told, had this not been a comedy, you probably would have seen Don as a character that even trumped psychiatrists. He manages to contain all the ingredients of someone who mistreats his kid, was sexually repressed and mentally deranged, but Seth doesn’t mind all this and we would rather laugh at the FAT kid… 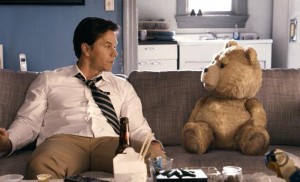 Okay, so maybe I was expecting something more theatrical?

Looks wise, it’s standard Hollywood skylines and bright colours. The world we are presented with is invariably Family Guy like with completely brilliant narrating by Patrick Stewart – who tells us that the fat kid grew up to become Taylor Lautner. I’d say it’s the type of film you need to watch with a group of friends, because honestly, you don’t want to laugh alone. Truth be told, I did laugh a lot and walked out the cinema thinking I couldn’t remember the last time I laughed so much at a film.

What one does have to admire in this film, is that whichever way you look at it, you forget one of the main characters is a toy bear and instead he actually becomes pretty autonomous throughout and actually starts to sound like a real person (including all the hyperbole). The special effects to make the bear come alive are somewhat impressive (bong smoking and all). Furthermore, I do have to admire Ted for bringing my cameo of the year in the form of Ryan Reynolds, who plays Jarred – the homosexual lover of one of John’s workmates. He appears twice, says nothing and waves. I was told this was a reference to something in Family Guy, but in the film it works so well and really comes across funnily.

As Stewart says, ‘No matter how big a splash you make in this world whether you’re Corey Feldman, Frankie Muniz, Justin Bieber or a talking teddy bear, eventually, nobody gives a shit.’ And really that sums it up – the film is off the moment with a lot of cultural references which won’t translate five years from now, so catch it whilst it’s hot (cannot believe I used that sentiment) because soon, Ted won’t matter but till then, it’s worth a laugh.