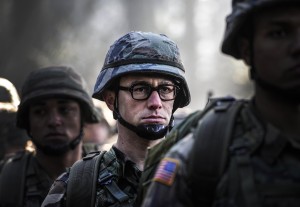 ‘The modern battlefield is everywhere.’

The ominous words uttered by Rhys Ifans’ commanding CIA official, acknowledging the sophisticated technological advancements that various mysterious and morally corrupt figures, use to abuse and threaten various corners of the modern world. Obsessed by the terrible terrors that lurk outside, we often dare imply that there is questionable activity from the powers entrusted to protect us on home soil.

Throughout his illustrious and controversial career, director Oliver Stone has certainly never shied away from being inquisitive and incisive about the ‘horror stories’ that have tormented his beloved America, with the likes of Born On The Fourth Of July, JFK and W. Already a story that anchored 2015 Best Documentary Oscar winner Citizenfour, Stone now provides us his own take on the man who some deem a whistleblower, others a hero. Mr Edward Snowden.

Drawing inspiration from the works of Luke Harding (The Inside Story Of The World’s Most Wanted Man) and Anatoly Kucherena (Time Of The Octopus), Snowden begins in the tense confines of a Hong Kong hotel room back in 2013 as Joseph Gordon-Levitt’s titular character consults with filmmaker Laura Poitras (Melissa Leo) and a duo of esteemed journalists from The Guardian (Zachary Quinto’s Glenn Greenwald and Tom Wilkinson’s Ewan MacAskill).

Keeping mobile phones in microwaves and burying himself under a blanket as he types away furiously on his computer. To mock such actions would downplay the sheer magnitude and wealth of the information he has accumulated during his time in the CSA (Central Security Agency), as he willingly exposes the data and documents collected through illegal surveillance programmes created by the United States government.

As the film chronicles the crucial moments that lead to this momentous reveal, we’re granted an insight into the backstory of Edward as director Stone looks to humanise the supremely intelligent character, devoting screen time to Edward’s unfortunate 2004 episode within the Special Forces and his loving relationship with the loyal Lindsay (Shailene Woodley). 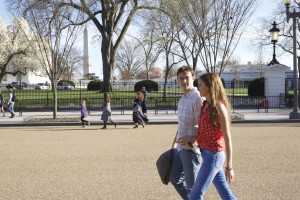 Snowden is at its most authentic and engaging within its first half, as the urgency of its Hong Kong trappings crackles with nervous energy as Edward eagerly awaits the approval of Joely Richardson’s no-nonsense Guardian editor to publish the sensational story. Through effective flashbacks, we get a palpable sense of patriotism from him also, as he struggles to come to terms with such homegrown wrongdoing. Sadly as the film progresses, the bias of its director manifests into the tone and the tacky visual choices made, increasingly developing into a rose-tinted viewpoint that seemingly downplays its obvious narrative stakes.

With his contained and convincing approach to the role, Joseph Gordon-Levitt’s performance as Snowden is utterly riveting, particularly in the impressive scenes alongside Rhys Ifans’ tough-talking Corbin O’Brian and the smarts of Ben Schnetzer’s programmer as he starts to uncover the harsh truth. Elsewhere, his on-screen romance and chemistry with Shailene Woodley’s Lindsay whom is also terrific would be applauded in another cinematic work. Here, it ends up proving problematic, draining the film of its dense drama despite Stone’s best efforts.

A both fascinating and fatally flawed picture with a fantastic showing from Gordon-Levitt at its core, the political potency of Snowden is ultimately smothered by an eagerness to apply a fantastical Hollywood sheen to its subject matter.