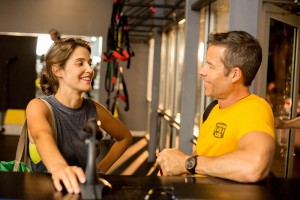 We often hear about actor’s rigorous fitness training for taxing blockbuster roles, so to see exercise on-screen on Results is almost a meta experience, as if the actors are training for the movie before our very eyes. Cobie Smulders, second tier Marvel performer, is probably on the kale juice daily anyway, but her character Kat is a much more prickly character than the dayglo superhero universes would ever provide. In her first scene, she chases down a gym customer who is behind on payments, flinging her body down in front of the 4×4 and chastising the woman for even being in the same car as her son’s birthday cake.

Kat’s an asshole, but in the context of writer-director Andrew Bujalski’s body of work, this is hardly unexpected. Being an asshole doesn’t make this woman any less worthy of Bujalski’s time, nor the limited but receptive audience of his filmmaking mould. Results flutters its attentions between three main characters, unpredictable moments consistently provoked through the character traits the audience gradually deepens their understanding of. The narrative has a bare arc, but events are at the whim of character rather than they being at the mercy of any kind of ridiculous machinations. Kat is an asshole and she remains an asshole, but by the time the credits roll, she’s also a human being. 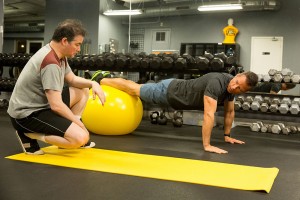 Kat is a trainer at Power 4 Life, the cringeworthy name of Aussie ex-pat Trevor’s (Guy Pearce) gym. As Results opens, the soundtrack, cast over hazy titles, immediately colludes sex and exercise, endorphins already pumping through the film’s core. The arrival of chubby, wealthy and isolated Danny (Kevin Corrigan) into the gym provokes these twin themes to swirl in motion between him, Trevor and Kat, though you would never call this a love triangle. Bujalski’s interest has always seemed to be chronicling individual existences rather than partnerships or collectives.

While Computer Chess gave Bujalski a chance to be truly idiosyncratic, Results sees him take a much drier approach, which does result – heh – in the film becoming rather trying as it progresses. Which is not to say that the performances don’t remain a rewarding reason to persist with the film: Smulders particularly is exploring revelatory new ground here, Kat’s flaring temper allowing her sharp acting style to become more robust and imposing. Corrigan, a familiar background player over the past few decades, gives Danny’s loneliness a piquant melancholy, sympathetic without compromising on the character’s inherent strangeness.

Pearce has the film’s most difficult task, though: earnestness in the face of Bujalski’s typically cynical worldview, and though his Australian accent seems almost parodic (would it sound right even in an Australian film?), he does a great job of deepening the audience’s understanding of the character through his naturalistic, cool performance style. And so Trevor’s commitment and passion, mockingly depicted in lengthy YouTube uploads, becomes realised as completely honest and laudably selfless. Cleverly, as the audience realises this, Trevor begins to understand the synthesis of his passion for his work in the other areas of his life. 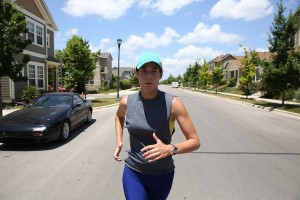 Results seems an odd title for a film that almost actively eschews the traditional cinematic schemas for narrative arcs and journeys and character progression. In that, Bujalski seems to almost be mocking the establishment, edging his characters closer to the sort of epiphany that they’re living in blinkered worlds. The realisation of what narrative that is comes with a tone so self-conscious it almost seems to be balking at cliché. The result is as sharp and acrid a comedy as you’re likely to get all year.

Results will be released in UK cinemas and digitally across iTunes, Amazon, Blinkbox and Google Play on Friday 29 May.