What if the Nazi’s had invaded Britain? What if they succeeded? What if the last line of defence were the British resistance? This is the premise for the recent British wartime drama Resistance, which is based on the novel by Owen Sheers. 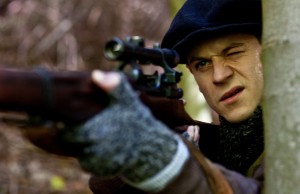 Set in Wales, it follows the story of a small village under Nazi occupation. Here the women stay at home and work whilst their men have disappeared into the countryside and have joined the resistance. The sympathy surprisingly falls with the German soldiers, especially the captain who tries to help out the women left behind, whilst the resistance are portrayed as a menace. The subversion of expectations is perhaps the best aspect of the film, forcing you to see beyond the obvious.

However this is probably the only really interesting facet in a very slow moving and drab drama. This is mostly to do with the characters, most of whom are very difficult to engage or relate to. Andrea Riseborough frowns her way through the 90 minute running time, creating a cold and ultimately unlikeable heroine. Similarly neither Michael Sheen nor Iwan Rheon is given enough screen time to really understand their characters and the resistance’s side of the story. The only character you do care about is the Nazi Captain played by Tom Wlaschiha who dominates every scene he is in. 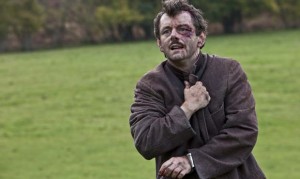 The cinematography is beautiful, allowing Wales to appear like a harsh environment for any invading force. It is clearly meant to resemble Russia in parts, or even Afganistan, as new Director Amit Gupta attempts to draw comparisons between the past and current events. All of this feels very forced and sadly is not as poignant as he would’ve hoped.

For that reason a great premise seems wasted, and Resistance never reaches its full potential. With all the fascinating background material and selection of brilliant British talent, a shabby script is to blame for the lack of action and characterisation.