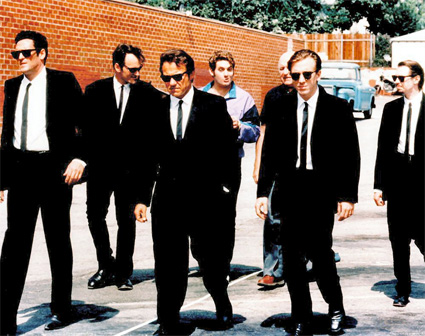 This film introduced Tarantino to the World in style. He had made one previous film but this was something special.

Ultimately a movie geek he managed to make a film that people had previously missed. It’s a heist movie – without the heist.

It tells the story of seven complete strangers who don’t even know the others real names. They are known only as Mr. White, Mr. Orange, Mr. Blonde etc These characters actually take their names from the original ‘The Taking of Pelham One Two Three’ film… but i digress…

There are some truly original and fantastic scenes. One of my favourites being the initial meeting in the diner where Mr.Pink (Steve Buscemi) refuses to tip the waitress. This was our first glimpse of the sharp wit and excellent script writing that we now expect as standard from Tarantino.

The acting is top drawer throughout. When the heist goes wrong, the surviving members of the gang all make their way back to the agreed hide out. It is explosive in terms of its graphic violence, another trademark we now expect as standard.

This film will forever remain a classic. Genius in its infancy.