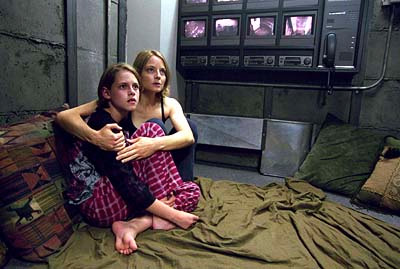 One word sums up this film – Lame. I was very dubious about the film from the beginning and how you could base an entire feature length film around a panic room in a house. I was right to be dubious, it was a poor show on so many levels.

The plot is basically a divorced woman Meg Altman (Jodie Foster) moves into a new house in New York which happens to have a “panic room”. Which is simply a reinforced cell built into the master bedroom to hide in if you have an intruder.

It just so happens that 3 men break in to the house straight after they move in and thus Meg, who is also claustrophobic and her daughter (who looks like a boy) are forced to hide in the panic room.

I thought after the successful previous films ‘Seven’ and ‘Fight Club’ David Fincher could be trusted but this is weak from start to finish.

The plot and the acting are so poor its laughable. Forest Whitaker in particular is terrible. It just so happens that the burglers actually want some sort of hidden treasure which happens to also be in the panic room and so they continue to fight their way into it. There are a couple of surprises throughout but for the most part it is predictable and boring.

If you are a fan of Jodie Foster you may be interested but otherwise i would say avoid at all costs. The photo above is as good as it gets!