What do you get if you cross Glee with Mamma Mia, transpose it into Tel Aviv and add a couple more transvestites, and a tonne more sequins?

You’d get Mary Lou, an Israeli TV mini-series based around the songs of Jewish pop-legend Svika Pick. Pick’s songs were huge in the 70s and 80s, catchy, camp and the perfect backdrop to the story of Meir (Ido Rosenberg).

On Meir’s tenth birthday, his mother Mary Lou (Maya Dagan) walks out, never to be heard of again. Desperate for answers, Meir concludes that his mother must have gone to Tel Aviv to follow her dreams – to sing with Svika Pick.

Fast-forward eight years, and Meir is in his final year of high school. He and his best friend Shuli (Dana Frider) sing and dance their way through the bad times and the good, until they fall for the same boy, Gabi (Alon Levi). After a disastrous graduation party, Meir takes off to Tel Aviv alone, determined to find his mother once and for all.

In Tel Aviv, he buddies up with Ori (Yedidya Vital), also known as Miss Sunshine, a cross-dressing cabaret performer. Taken under the spangled wings of the Holy Wigs, Meir sets of a a journey of discovery, looking for his mother as well as himself. 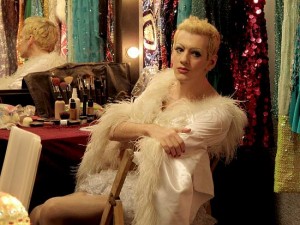 Anyone familiar with director Eytan Fox’s previous work will understand how groundbreaking his shows are. His portfolio showcases Israel’s first prime-time TV gay kiss, homosexual relationships in the army, and the Israeli-Arab conflict.

With Mary Lou, Fox tackles the difficulty of coming out, transgender expression, inappropriate crushes, homophobic abuse, the cathartic creative process and facing your issues head-on. He directs with a lot of heart, charm and tenderness, Mary Lou rarely feels heavy handed, though it is often sugary sweet and sentimental. It’s all good, clean fun though, the majority of the sexual acts are inferred not explicitly shown, and of course everything works out for the best in the end.

Rosenberg is great as Meir, he was affable and likeable, and proved to be a great lead. Levi a dashing embodiment of traditional masculinity in his soldier’s uniform with his rifle, torn and conflicted. Ori’s relationship with Shlomi (Angel Bonani) raised different issues in queer youth, and what (not!) to do when your boyfriend only wants to date an aspect of you, not for the complex, whole self.

Mary Lou excels not in shocking plot twists and turns, although there are a few that I didn’t see coming, but in the heart of the characters.

It translates from four TV episodes into a movie surprisingly well. There are four obvious episodic arcs, but the through-lines are strong enough to sustain the 150 minute run time. It was quickly paced, and definitely didn’t lag.

It’s frothy, wholesome fun with unexpected charms and a big heart; a feel good TV-cinema experience. Check it out if you can.

Mary Lou played at the UK Jewish Film Festival, which runs until November 20. For more information on the festival, and their all-year-round programmes, check out their website here: www.ukjewishfilm.org