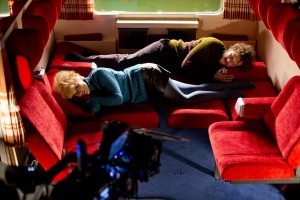 Full of the exuberance we’ve come to expect from the director yet lacking the narrative finesse of his finer works, the 2013 aircraft comedy I’m So Excited sadly felt like Almodovar on autopilot. Often renowned for crafting wonderfully complex female characters at the heart of his passion projects, Pedro’s latest effort Julieta sees the Spanish auteur back on familiar footing.

Putting his own cinematic stamp on three short stories originally written by Alice Munro, the film deals with themes of abandonment and guilt whilst trying to re-assemble the pieces of the protagonist’s hearts that have been left scattered by such longing and pain.

Painting the opening frames with his trademark and lush primary colour palette, the sharp intakes of breath from Emma Saurez’s adult take on the title role are captured through extreme close-up, accentuating the anxiety and uncertainty she’s plagued with as she bids to leave Madrid for Portugal. Only for her world to be turned upside down through a chance encounter with a beloved friend of her estranged daughter Antia (Blanca Pares), confirming her whereabouts.

Desperate to re-connect, we are led through the compelling contents of Julieta’s journal. Transporting us back to a time when her relationship with the handsome Xoan (Daniel Grao) was beginning to intensify, peppered by her slight, heartfelt narration as the tragic circumstances begin to unravel and affect her wider family. 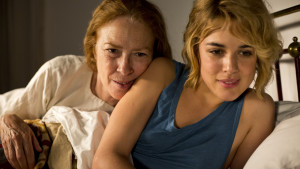 Through exquisite composition and framing, Almodovar uses the sumptuous settings to really enforce the emotional state of his leading lady. Confrontational in tender close-ups when faced with revisiting the hardships of the past. Impeccable long shots as she is consumed with guilt, enforcing her reluctance to commit once more beyond her maternal duties, leaving her withdrawn from the rest of the world. The visual palette merely accentuates the intentions of its director, as the ravishing reds, the seas of blue and the cleansing white decor and interior are used to wonderful effect, equally capturing the desire, the despair and eagerness to start over.

Whilst the narrative structure occasionally leaves the film feeling somewhat uneven and stunted in its emotional impact as it leaps between different time frames, the brilliance and nuance of Emma Saurez’s Julieta is what ultimately powers this simmering story. Complimenting the surprisingly dialled-down approach of Almodovar here, the restraint in her delivery of dialogue is juxtaposed by the sheer and subtle devastation etched across her face, with one particularly tender ‘switch’ between herself and the wonderfully played younger version of Julieta played by Adriana Ugarte mid-scene proving stunning.

It may result in audiences craving a more definitive finale, but perhaps that’s the point of ‘Julieta’. We may often leave issues unresolved for months or years at a time through sheer stubbornness or fear. But with familial ties tough to truly break, it often leaves us clinging onto the hope of an initially tense but ultimately satisfying resolution. Another impressive entry into the Almodovar back catalogue.