You’d be hard pushed to find a classic Hollywood director as unconventional, controversial and versatile as Samuel Fuller. A genuine enfant terrible of film making, he worked across genres, in Film Noir, Westerns and War films, and left his mark on each one. Known for his cynical tone, boundary pushing subject matter and B movie aesthetic, his films might not often be listed among the best the genres had to offer, but they all have a distinct tone, and are incredibly different to the standard studio fare.

Fuller At Fox is a boxset of films Fuller made while at 20th Century Fox, which served as a highpoint in his productivity and range. This release features some of his most influential films, each one given the comprehensive treatment that is now synonymous with Eureka Entertainment. 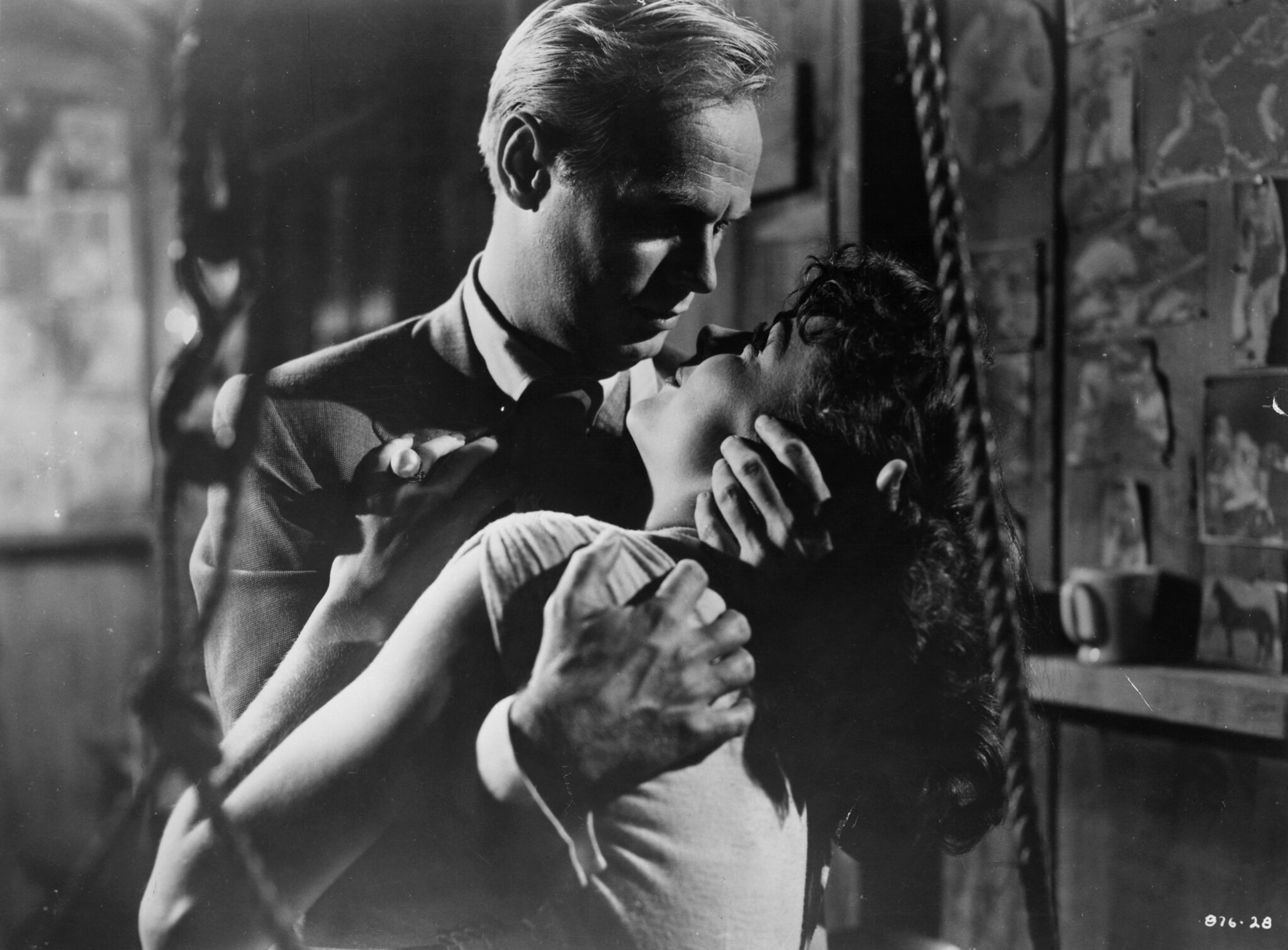 Fuller did some of his best work in noir, with The Naked Kiss and The Scarlet Kimono also excellent entries in the genre, but Pickup On South Street is the clear stand out. Sleazy, cool and always engaging, and potentially Fuller’s best film full stop, this is one of the quintessential film noirs of the classic period, and the highlight of the box-set.

The always reliable Richard Widmark plays a professional thief who picks the wrong pocket and ends up with a piece of government microfilm in his possession. With the cops, the FBI and communist gangsters in hot pursuit, as well as the lovelorn woman he stole it from, his attempts to sell to the highest bidder start to give way to his nagging conscience.

Shot in crisp black and white, with a vivid cityscape providing the perfect setting for the prolonged chase that comprises most of the film, this is a suspenseful thriller that never loses it’s focus.

The film does have a playful, funny side as well, demonstrated best by Thelma Ritter’s scene stealing performance as Mo, the professional stool pigeon, who prides herself on selling the same information multiple times. She manages to make her character comic and tragic in equal measure, and was justly nominated for a best supporting actress Oscar. This is perhaps her best performance in a career full of memorable supporting roles in films as varied as Rear Window and All About Eve.

Widmark is also great, in a rare sympathetic role, (well, relatively speaking) and the chemistry between him and Jean Peters is palpable. It’s slightly marred by an underwhelming ending, but as with the best noir, the genius lies in the hard boiled dialogue, the stark cinematography and the grimy atmosphere, and there is more than enough of that here to warrant it’s status as a classic of the genre.

This a film that really shouldn’t work. It’s a film noir shot in colour for a start! But somehow it does. A remake of The Street With No Name, following an undercover agent (Robert Stack) attempting to infiltrate a ruthless gang of bank robbers, and their leader (Robert Ryan) who runs every robbery like a military operation.

The key difference between the two films is the setting, transported from the US to Japan. It’s not merely a superficial change, as the setting informs the plot in a really interesting way. Fuller makes the most of the amazing setting, and Stack’s relationship with a Japanese girl played by Shirley Yamaguchi is handled pretty sensitively for the time, giving her agency and a proper character which is rare for a film of this era.

It helps that the cinematography is stunning, looking even better on this blu ray release. Shot in widescreen, it’s really visually arresting, and showcases Fuller as a genius of composition. Every frame is masterfully constructed, and shot in striking Deluxe Colour.

This was the biggest surprise for me in the set, and I really enjoyed it. Ryan is awesome as the smooth, arrogant villain who portrays himself as a machiavellian planner but isn’t actually as smart as he thinks he is, and there are several great, hard boiled set-pieces. It is a messy film, with an awful lot of loose ends, but it’s easy to ignore a handful of nitpicks when a film is shot this beautifully. 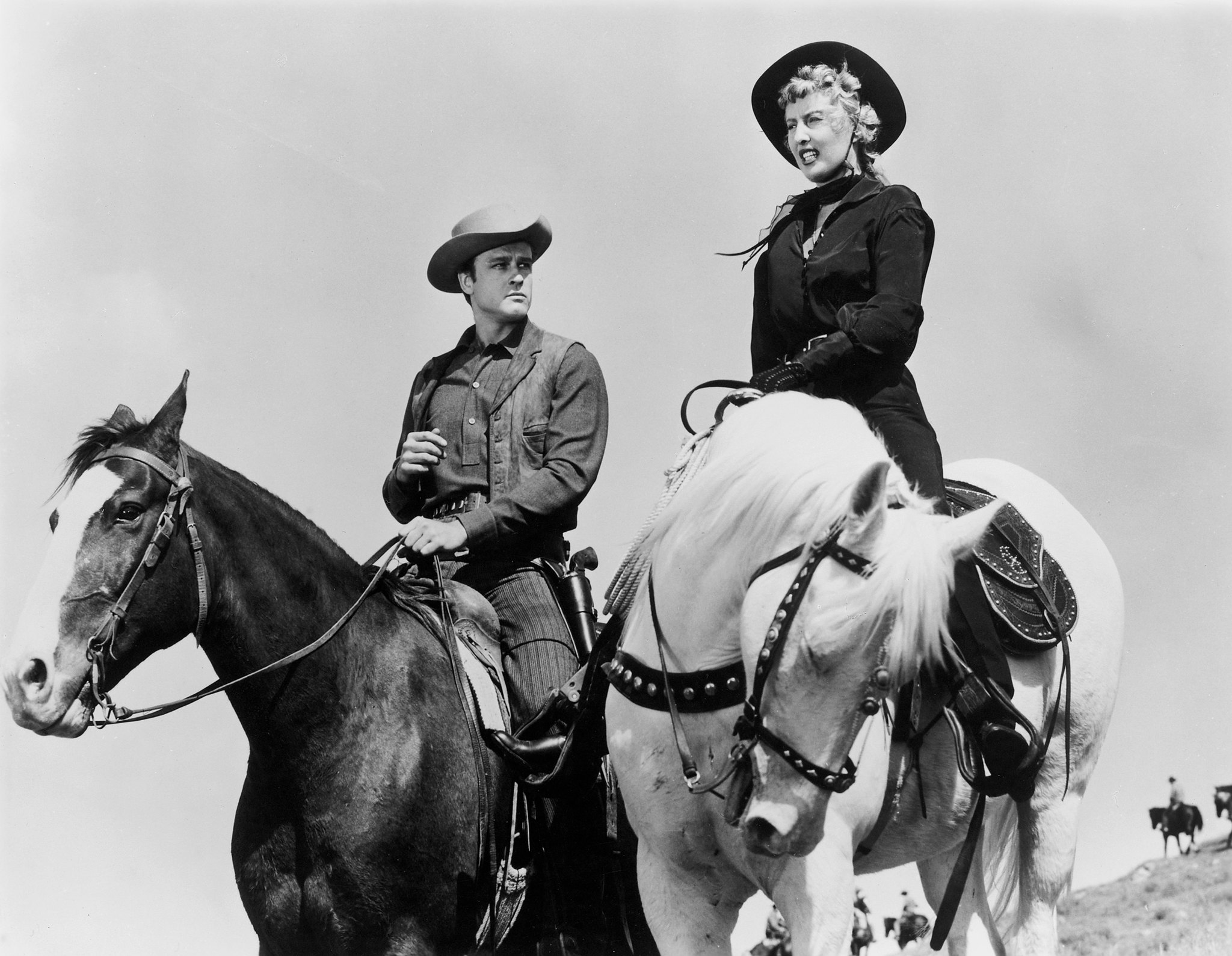 A good old fashioned western melodrama, Forty Guns is overly simple and not particularly original, but it features some directorial flourishes from Fuller that make it stand out from the crowd.

The story of a trio of brothers (who vaguely resemble the Earps) arriving in a living in a town living in the shadow of a wealthy landowner, Jessica Drummond (Barbara Stanwyck) and her hired army of gunhands, the Forty Guns of the title. The oldest brother, Griff (Barry Sullivan) is a lawman who quickly makes an enemy of Jessica’s impulsive brother (John Ericson) while Jessica herself becomes increasingly disillusioned with the empire she’s carved for herself in the west, especially as she fights her attraction to Griff.

While this isn’t the most original western, it has a lot going for it nevertheless. Sullivan is a solid lead, who gives a low key but effective performance as Griff, and Stanwyck is incredibly cool, and plausible as a strong female character in a male dominated genre. The performances are great from all involved, with Dean Jagger especially memorable  as yet another corrupt, sad-sack sheriff.

Forty Guns doesn’t reinvent the wheel, but it’s a good genre piece, with some relatively shocking set-pieces, solid performances and striking cinematography. Previously available as part of the Masters Of Cinema set, this version is newly authored from Fox’s 4K restoration, and the black and white cinematography looks absolutely incredible.

The war films are where the boxset falters slightly, which is especially odd considering Fuller’s firsthand experience of the military, which he put to devastating effect later on in his career with The Big Red One, arguably his most mature film.

Fixed Bayonets! is the first film Fuller made with Fox, and is probably the most generic in the boxset, albeit shot and directed with Fuller’s distinctive eye for suspense. There are a handful of stand out scenes, most notably one involving a minefield, that show what he is capable of, but by and large it’s not that interesting. This is best demonstrated in the clunky battle scenes, which show the film’s budget limitations, clearly shot on a soundstage. The performances are strong but this feels more like a practice run for what would follow.

Apparently when shooting 1941, Steven Spielberg took Samuel Fuller out to his car. He said he always kept a copy of his favourite film with him, and took out a print of Hell & High Water. It’s… a strange choice to be sure, as there isn’t that much in this cold war submarine adventure to set it apart from the countless generic war films made in the fifties. (See also Ice Station Zebra and The Enemy Below)

The most memorable element is Fuller’s fantastic cinematography (the red lighting is especially striking) and Widmark, again, as the Submarine captain, who brings his customary world weariness to the role that makes him the perfect protagonist for Fuller. The same can’t be said for the supporting cast who (with the exception of Fuller stalwart Cameron Mitchell) tend to merge together. Bella Darvi is incredibly stilted as the beautiful nuclear scientist, and there is zero chemistry between her and Widmark. It’s strange that these two films feel so dated, especially considering Fuller’s proximity to the subject matter, and when the other films are so timeless by comparison.

Overall this set is well worth owning as a gateway to Fuller’s distinct style of film making. It is a bit of a mixed bag, but even the flawed films are intriguing thanks to Fuller’s direction, and his approach to what could be fairly generic material. Pickup On South Street and House Of Bamboo are both excellent, and more than make up for any weaknesses elsewhere, and the Blu Ray transfers look stunning across the board.