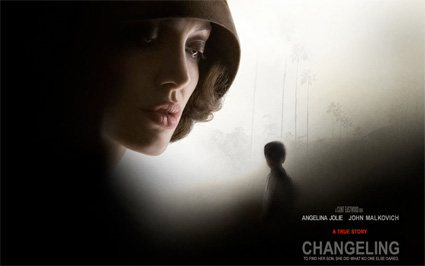 A very dark and tragic tale. Based on a true story and set in 1928. Its the story of a single mother who works hard to provide for her son. One day, the boy disappears. After the usual missing persons melee with the police… nothing happens and the boy is lost.

Its not until five months later that the police return the boy to her. Her, being Angelina Jolie. Its a great circus of press adulation for the LAPD and what a great success for the force… trouble is, its not the right boy.

Christine Collins (Jolie) is forced to accept the boy as her own to save face for the police. Inevitably she isn’t going to settle until she gets her real son back and in doing so encurs the wrath of the police department.

The story has some very dark moments, its certainly not a date movie! All told, there are some fantastic performances, Jolie is impeccable along with some of the other patients of the mental ward.

Yet another solid directorial masterpiece from Clint, the man just gets better and better. He has so much experience in movie making now, its difficult to think of anyone that could rival him for pure beauty of story telling, even with such tragic subject matter.