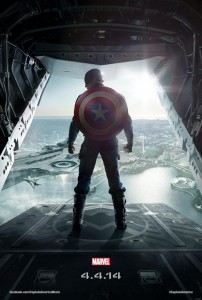 Finding the right balance in a superhero film, with a mingling of classic comic book caper, fully blown, ridiculously athletic battles and satirical asides that highlight the ridiculousness of it all, is somewhat rare. Great film characters with superpowers are born from a film that’s grounded enough so the audience can relate, surprising enough so the audience is curious and clever enough to keep them guessing. The new Captain America sequel, entitled “The Winter Soldier” just about gets it right and it was a lot of fun to watch

Chris Evans again takes on the role Steve Rogers aka Captain America, with an ease and charisma that keeps me comforted in the knowledge that he won’t be replaced anytime soon, a la Hulk. Taking place post the terrific Avengers Assembled malarkey, we see the Cap in the thoroughly modern world of Washington DC. The setting is taken full advantage of with sweeping shots of the Lincoln Memorial opening the film as Rogers laps the scene with his superhuman speed and Sam Wilson, played by Anthony Mackie, does one lap with his regular human speed. Friendship kindles but our idyllic views are chipped away at as we realize that Rogers is now working, with all his kick-buttery, for S.H.I.E.L.D and not all is as it seems… Revelations are revealed and it turns out his old (very old, well, dead) friends are the founders of the not-at-all corrupt law-enforcement and spy agency itself, amongst other things that would be a shame to give away.

Saying that, I hope people don’t Google the movie too much before they see it, as one of the biggest twists in the film, cleverly directed and edited to keep you a comfortable in a “it’s just another brainwashed baddie” temperament until the last moment, is an absolute winner. It’s no M Night Shamalan, and those who are into the comics will already know, but to us outsiders, it’s a blinder.

Anthony Mackie is my highlight of the film, portraying the first black superhero, Falcon, with charm and being one of the only good guys, other 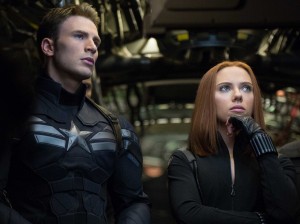 than the Cap himself, that you are sure is actually good. We are less sure about Samuel L Jackson’s Nick Fury but absolutely sure that throwing him solo and headfirst into some machine gun ambush action was a great call. Nick Fury seemed to have a label of a talker rather than a doer most of the time in the now lengthy 9 film franchise and it was great to see him outwit the baddies with his own skills, rather than relying on the strength of his Avengers. Scarlett Johansson is also on solid sidekick duties as the Black Widow, this time with a very 90’s straightened hairdo that I’m not sure will catch on… Her past is alluded to as the source of her heroism and her controversy, again, which might be a little of a disappointment to fans who will want to see more of this complicated temptress… though this seems pretty rectified during the climax of the film during very Iron Man–esque press conference.

The success of this film is probably down to getting the Russo brothers, Jon and Anthony, of Arrested Development success, on board. After Joss Whedon’s Avengers Assembled, it’s clear that quirky directors do great work with quirky material, which is exactly what watching heroes with superpowers throwing punches and quipping for an hour and a half is – however mainstream it’s come to be. Getting the franchise back to the geeks that buy the comics and are part of the cult followings of Buffy and Arrested Development is exactly what I’d like to see. Please. Thor 2 hurt me a bit, however great bits of it were.

Captain America: Winter Soldier is bound to be a stone cold killer in the box office – see what I did there.