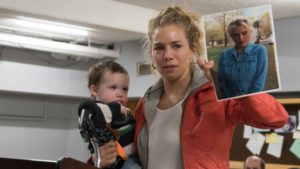 Its good to see that nepotism is not in abundance in Hollywood. Not like the right wing, capitalist entities or the media conglomerates. Oh wait that seems to not figure in the case of Ridley Scott’s son, Jake Scott or Tilda Swinton’s daughter Honor Swinton Byrne (among many more). The former however is of note for actually having some form in the industry, from directing Adverts, high profile music videos to features like PLUNKETT AND MACLEANE. Now to be fair, this works hasnt ascended the heights of directors like Michel Gondry or Spike Jonze. His adverts and music videos often languished in second gear and his features have been either throw away or erratic and heavy.  Now he brings us AMERICAN WOMAN, a social commentary thriller that makes a good case for giving Jake another chance. If not for anything else, then Sienna Millers stunning turn as a mother, trapped in a waking nightmare of fear. 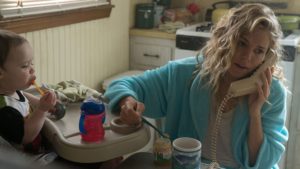 Small town Pennsylvania is not the place for drama and crisis. Debra (Sienna Miller) lives in the town she was born in. She parties, has and affair with a married man Brett (Kentucker Adler) and has a daughter Bridget (Sky Ferreira) from a teenage relationship. Bridget has a child from her own drunken relationship with on- off boyfriend Tyler ( Alex Neustaedter). All seems to coast along, until Bridget disappears one night. She had gone out to see Tyler, and now she has not come back. Debra at first thinks it is only a drunken stop over, then maybe a argument that has kept her away. But as the hours roll by and things become clear it is much more complicated. She has disappeared without a trace and as the time ticks by, there is less chance of a positive outcome. 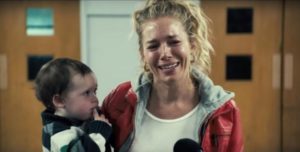 In film criticism, you often can see the fates align. This means you could sense of failure. Then you can sense a success. However sometimes you cant call it. AMERICAN WOMAN is one of those times. It strengths going in were not apparant. Jake Scott is an average director. The cast is peopled with a range of actors. Most are average and a few peak as okay. Brad Ingelsby was a high point, mostly for his work on OUT OF THE FURNACE. Well it seems that Ingelsby script and Sienna Millers performance, has lifted the film from an average thriller. Ingelsby script is subtly played. 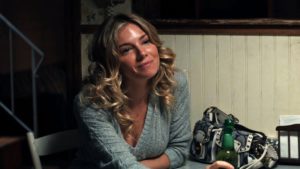 It is sensitive about the personal drama and slowly develops the narrative with humanity. It never sensationlises. Its core is always about a parents ultimate nightmare. Nothing more and nothing less. This is not easy to do. But then you see Sienna Miller. You realise her (alongside the cast who are universally very good) toned down acting, layers each event. Adds substance, texture, drama, pain and extracts the suffering. She is not only a victim however and her emotional vibrancy is defused throughout with a cleverness. A woman trapped in a life of pain, a woman who is doing what is right and then as the ending unfolds, a woman who must make life again. I guess you would say an AMERICAN WOMAN