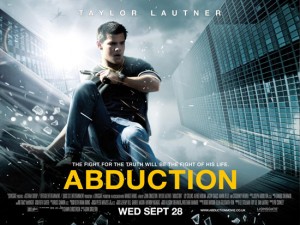 After the negative feedback on Taylor Lautner’s acting ability, Abduction was his chance to really prove himself. Sadly Lautner misses the mark by miles in this drab action thriller which is more Bour-ing than it is Bourne.

The plot surprisingly does not revolve around an abduction, but instead focuses on Lautner’s obnoxious teenager and his girlfriend Karen (Lilly Collins) as he discovers that his parents aren’t who they claim. Soon all manner of henchmen come to kill the pair and a cat and mouse game ensues with predictable consequences.

With Abduction the producers where clearly aiming to make Bourne for the Twilight generation, but the end result is dire. Lautner’s performance really is a shocker, as he pouts and smirks his way through the running time. Also for an action film Lautner does very little fighting at all. Instead he is mollycoddled by Weaver’s and Molina’s CIA agents and when he does finally get into a fight it’s a tedious affair

Despite this there is a huge amount of real acting talent wasted. Sigourney Weaver and Alfred Molina both play CIA agents whose screen time is spent giving out bits of dull expostion. Similarly Jason Isaacs has but a very small part to play despite being the only decent performance. Worst of all, The Girl with the Dragon’s Tattoo’s Michael Nyqist is completely wasted, cast as a stereotypical European Spy. All of which make the performances in Twilight seem Oscar worthy.

Die hard Team Jacob fans will no doubt lap it up, but for anyone who is not in love with Lautner, Abduction is a painfully dull 106 minutes which fails to entertain.