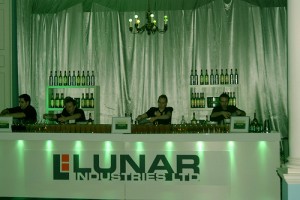 Last week Frontrow was lucky enough to be invited along to the Jameson Cult Film Club’s St Patricks Day screening of Moon. This special screening was held at the Royal Institution in London, and was an extraordinary event.

Upon arrival guests were given drinks tokens to exchange at the bar for free Jameson cocktails of their choosing and the whole building was decked out impressively for the event. There were actors walking around impersonating Sam Bell, the character from the film; pruning bushes and just generally looking as bored as Sam does in the film. The decorators had also gone crazy with the space theme elsewhere, with shiny foil strips hanging from the ceiling, space food on offer, and disco balls galore. 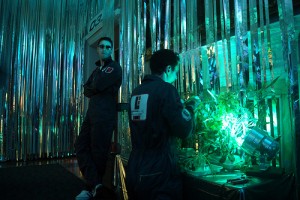 I’d never been to the Royal Institution before but it’s a very impressive building. The screening was held in the main room which is a semi circular hall that was originally used for scientific demonstrations. The night’s most impressive stunt was pulled before the film started as a spacesuit-clad acrobat was strung from the roof and performed slow space like gestures in mid air. Before Moon started there was also a star studded short film presented; Blake‘s Junction 7. Starring Martin Freeman and Johnny Vegas it’s a hilarious spoof based on the cult Blake 7 television show and a recommended watch if you can get hold of it. As for the main event, Moon proved its worth once again at what was my second screening. (Read the full Moon review here).

Overall, the night was a huge success, with Jameson spending more of this years budget on an impressive setup rather than goody bags and prizes for guests (giveaways at last years St Patricks Day event). Completely free to attend for all and very enjoyable, I look forward to the next Jameson screening.