Trailer and Poster for documentary Altman 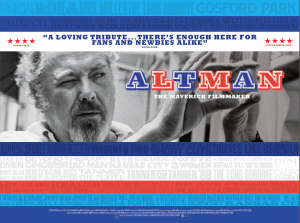 Ron Mann’s new documentary Altman is an in-depth look at the life and times of filmmaker Robert Altman (M*A*S*H, McCabe and Mrs. Miller, Nashville, The Player, Gosford Park, and many more.) While refusing to bow down to Hollywood’s conventions, or its executives, Altman’s unique style of filmmaking won him friends and enemies, earned him world-wide praise and occasionally scathing criticism, and proved that it IS possible to make truly independent films.