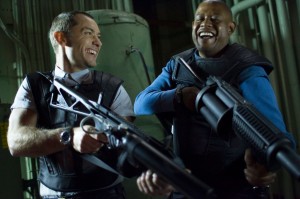 In a futuristic America, medical science has led to the development of mechanical replacements for every conceivable body part. However the cost of perfect health comes at a hefty price, albeit one that medical firm ‘The Union’ is prepared to work out personal payment plan’s for. But what happens to those who don’t keep up their payments? Well, you’ll be found by Repo Men like Remy (Law) and Jake (Whitaker); they’ll hunt you down, taser you to the ground and then cut you up to claim back that organ you couldn’t really afford. However after one job goes wrong, Remy himself requires a life-saving artificial heart. Now a victim of the system, he begins to questions his job and its cruel consequences. Unable to bring himself to cut and slice anymore, Remy falls behind on his payments and goes on the run from former partner Jake, who has been sent to reclaim his heart.

Repo Men’s first 30 minutes echoes Blade Runner’s action sci-fi mood, as Remy and Jake hunt down and reclaim their bounty in some immense fight sequences. These action scenes are set to some pumping 90s anthems, and the film looks set to be a great action flick. However this then peters out, in preference for subplots involving Remy’s whiney wife (Carice van Houten) who wants him to transfer from Repo to Sales, and then later onto his relationship with another runaway (Alice Braga). Here the action is relegated in favour of some poorly scripted drama, and the film begins to meander around vaguely, undecided where it’s going and which genre it should opt for. Presumably Law was cast to try and hold this drama plot together, rather than on any experience as an action hero. If the producers had cast a prolific action star and kept up the explosive fights, Repo Men would have worked out a lot better. There’s also a blatant rip-off of an Oldboy fight scene (which presumably the director was hoping the audience won’t have already seen?) when Remy takes down a corridor of Union employees attacking him; yes it’s enjoyable to watch, but it’s also totally unoriginal. 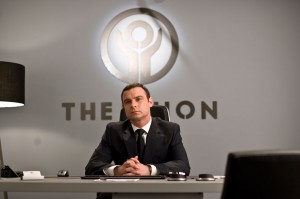 It’s surprising to see that Forest Whitaker has already fallen so far from grace, with such a clichéd role after being an Oscar winner just 4 years ago in The Last King of Scotland. Liev Schreiber is the true star of the film. Playing Union boss Frank, he is not just the scheming villain but also plays the comedic fool hilariously. It’s high time he was given a starring Hollywood role for his acting skills.

With a chance to criticise corporate greed, Repo Men could have touched on some interesting issues but instead it opts for graphic violence, concentrating on action and story rather than any interest in social commentary. It’s certainly not for the faint-hearted, and even the most hardened film-goer will get squeamish at the progressively graphic scenes of organ surgery and removal. Some amusing dark humour is slipped in occasionally to offset this, but it’s a bit too dim-witted and the film could certainly have benefited from a bit more comic relief at times.

As a straight out action film, with perhaps some more appropriate casting, this could have been a great film. Whilst it starts out well, the wobbly story line becomes boring and the over indulgent gore scenes make it often unwatchable. I’d wait to rent the DVD, or alternatively watch the rather unknown ‘Repo! The Genetic Opera’ which plays along the same lines.