Variety are reporting that Julie and Julia director and writer, Nora Ephron is collaborating with Sony Pictures to direct a big screen adaptation of ITV’s four-part 2008 fantasy adaptation, Lost in Austen which is itself an adaptation of Jane Austen’s Pride & Prejudice. 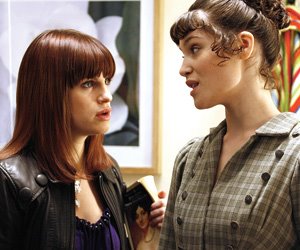 Ephron is said to be currently writing the script while Sam Mendes and Pippa Harris are producing through their Neal Street Prods.

The original Lost in Austen was written by Guy Andrews who has also written for ITV’s Poirot. Lost In Austen follows a modern girl (Jemima Rooper) transported into the middle of Jane Austen’s Pride and Prejudice via a portal in her bathroom.

The project is a good fit for Sony, known for staying in business with its most successful talent: Julie and Julia brought in more than $125 million in worldwide box office with Meryl Streep earning a best actress Oscar nom.

Ephron made her mark penning and then helming original material, but in recent years she’s brought her own spin to adapted material, including a Bewitched remake in 2005.

Lost in Austen was not the huge hit that ITV were expecting but it was well-received by critics; The Independent called it “Pert, warm and funny,” and In December 2009 it was placed at 48 in the ‘Top 50 TV Shows of the Noughties’, a list published in the The Times. It also starred Gemma Arterton (Quantum of Solace & Tamara Drew) playing the role of Elisabeth Bennett.