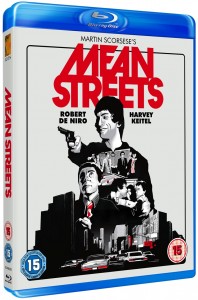 Martin Scorsese’s truly unforgettable knockout classic Mean Streets comes to UK Blu-ray for the first ever time on 18th May with new exclusive artwork and never before released extra features!

One of the best films of the 1970s, it’s the granddaddy of the modern crime cinema and it heralded the arrival of screen legends Martin Scorsese, Robert De Niro and Harvey Keitel.

The film shows off Scorsese’s burgeoning bold and thrilling style that would influence generations of filmmakers in its wake.

“It really was accurate, that was my life.” Martin Scorsese

“One of the best American films of the decade” Time Out