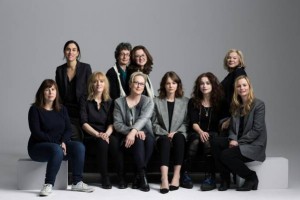 To celebrate International Women’s Day on Sunday 8th March 2015, Pathé is proud to release this portrait of the women behind SUFFRAGETTE – the first feature film to tell the story of the ordinary British women at the turn of the last century who risked everything in the fight for equality and the right to vote.

Depicted in the photograph are the stars of the film Carey Mulligan, Helena Bonham Carter, Anne-Marie Duff and Meryl Streep; the director, Sarah Gavron; the screenwriter, Abi Morgan; and the producers, Faye Ward and Alison Owen.  They are joined by Helen and Laura Pankhurst, great-grand-daughter and great-great-granddaughter of Emmeline Pankhurst, leader of the Suffragette movement.  The photograph was taken by Brigitte Lacombe in London on 12th February 2015.

The theme for International Women’s Day 2015 is ‘Make it Happen’ – the filmmakers depicted in the photograph did just that.  According to the BFI (British Film Institute), in the 7 years from 2007 to 2013, the average percentage of British films released each year that were directed by women was 12%; and for films written by women the percentage was little better at 14.8%.  Perhaps the small number of female voices in the industry is why no feature film has ever been made about the women who 100 years ago fought for the right to vote.  Their strategy of passive resistance inspired political leaders from Gandhi to Martin Luther King.  It is a story that should not be forgotten.

Meryl Streep, who plays Emmeline Pankhurst in SUFFRAGETTE, commented: “Every daughter should know this history, every son write it on his own heart”

Sarah Gavron, director of SUFFRAGETTE, stated:  “International Women’s Day celebrates the achievements of women throughout the world and I am overjoyed that my film can be part of that celebration.  The story of the ordinary British women who were willing to sacrifice everything in their fight for the right to vote is an inspiration to all of us in our ongoing fight for equality.”

Helen Pankhurst is a Special Advisor on Gender Equality for Care International.  On International Women’s Day, a number of the filmmakers will be joining Helen and Laura Pankhurst for the CARE International “Walk In Her Shoes” event – a public walk to show solidarity with women and girls worldwide who still endure inequality and injustice. The public are invited to join the start of the walk at The Scoop outside London’s City Hall at 10am on 8th March 2015.