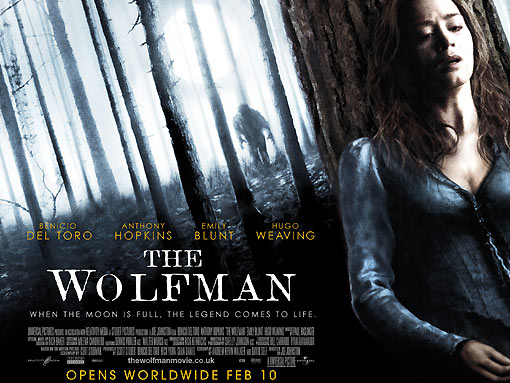 Some time ago we told you all about the E4 Slackers Club, who are giving students free cinema tickets in a series of screenings with picturehouse cinemas. Well were pleased to announce there having another screening, this time of the new horror thriller The Wolfman.

The Wolfman is a remake of a 1941 classic B-movie. It stars Benicio Del Toro as British nobleman Lawrence Talbot, who upon returning to his ancestral homeland following the disappearance of his brother, discovers that something monstrous is threatening the townspeople. Attacked by a rampaging werewolf, Talbot is bitten and is subsequently left bearing the beast’s mark in the form of a curse.

This free E4 slackers club film screening is at 1:30pm on 10TH February and is on at all Picturehouse cinemas across the UK. If you’re not already a slackers club member then you simply need to flash your NUS card at any picturehouse cinema to join and then you can book tickets for the slackers screenings. Tickets are allocated on a first come first serve basis and do need to be booked in advance at the cinema or on the phone so be quick!