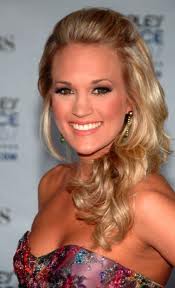 The country singer stars as a youth councillor in Sean McNamara’s drama, which follows the inspiring story of a teen surfer who overcomes a lethal shark attack to return to the water.

The film, which is scheduled for release on April 8, also stars Helen Hunt, Dennis Quaid and Bridge to Terabithia actress AnnaSophia Robb.

This isn’t the first time the American Idol winner has tried her hand at acting, after appearing in the hit US sitcom How I Met Your Mother last year. But 28-year-old Carrie admits that her transition to film was far more challenging.

“I think the most challenging aspect of making this movie for me, is just that I’ve never done it before. This is all very new to me. I know how to sing, this is something way out of my element.”

Guess we’ll have to wait a while to see whether Carrie can churn out those lines better than she can belt out those tunes.