LFF 2011: We Need To Talk About Kevin Press Conference

One of the big British films at this year’s London Film Festival was Lynne Ramsay’s We Need To Talk About Kevin. Based on the bestseller, it tells the tale of a troubled mother/son relationship which culminates in a shocking act of violence. Ramsay was there to discuss the film alongside writer Rory Kinnear and star Ezra Miller. 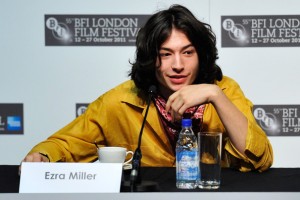 Ramsay’s last feature Morven Callar was released over ten years ago and many were curious as to why there had been such a long time between projects as well as what had drawn her to Kevin in particular; “Yeah, it took along time. But I’ve been making music and some drumming in the meantime so I have been having a life as well! It’s been great. It was a real Fitzcarraldo, push a boat up a hill, to get this made and I had a bad experience with one before so i hadn’t planned to take that amount of time out. But it kind of happened. It was kind of good to take a step back a bit. This was a very complex project as well, the script was very complicated. It’s great to be back though.”

“I don’t usually read that many contemporary novels, I’m still working my way through the classics! This was like the most original thing I had read for ages. It is a modern classic I think you could say because it addresses quite a taboo subject matter which I don’t think has been explored in film that much. So that attracted me to it”

Ezra Miller plays the role of Kevin, the psychotic son of Tilda Swinton’s character upon whom the narrative is focussed. Before this he has had a number of roles including controversial coming of age film Afterschool. Like Tilda Swinton it was very clear Ezra was a piece of perfect casting for Ramsay. She stated that over 500 actors auditioned for Kevin, but Ezra was definitely the one; “When he walked into the room I phoned Rory (Kinnear) and said I’ve found Kevin. I did make him work for it, but he just ‘got it’. I dunno something happened.” 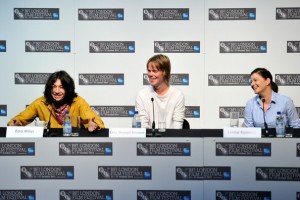 Casting for the younger version of Kevin also seemed to be straight forward for Lynne despite the difficult role; “Rocky Duer is three and a half and I didn’t know if i could direct a three and a half year old.” “(In his Audition) he just walked into the room, he was lower than his table … he was tiny! With his little leather jacket on he climbed up on a chair that seemed to be a big mountain for him and turned around. I asked him if he could say Mummy and he said ‘NO!’ and when I asked him to throw something he threw it at me. And then that was it he didn’t say another word and just walked out of the door. And that was it. That was the whole thing!”

As for Lionel Shriver’s reaction (the book’s author) , Ramsay said she was shocked by the adaptation but in a positive manner. She pointed out quite rightly that film adaptations should be seen as a separate entity despite the source material, citing The Shining as an example. However unlike Kubrick and King, Ramsay and Shriver clearly have a good working relationship.

We Need To Talk ABout Kevin will no doubt get numerous nominations this award season and hopefully we’ll be seeing much more of Lynne Ramsay’s work in the years to come.

Read our review of We Need To Talk About Kevin Here