The One I Love Review - Sundance London
Home
Reviews

Sundance London: The One I Love Review 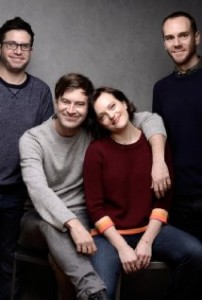 Charlie McDowell’s The One I Love is one of the best genre bending films to have arrived in years. This romantic comedy drama cum science fiction thriller is a hilarious, touching and hugely exciting exploration of a marriage, void of trust, but trying to find its feet once more. Starring the always incredible Elisabeth Moss (Mad Men) and the witty and intelligent Mark Duplass, The One I Love is a film, which leaves an ever lasting impression on the mind. Recalling the work of The Twilight Zone and more recently, Richard Kelly’s The Box, McDowell along with screenwriter, Justin Lader, has created a world in which the impossible seems hugely possible. The audience are asked to leave inhibitions at the door, and forced to suspend their disbelief, but the pay off is so incredibly wonderful.

Moss and Duplass, play Sophie and Ethan, a couple who are suffering due to Ethan’s past extramarital indiscretion. They have ended up in counselling (their counsellor is played by Ted Danson) and they just can’t seem to get in tandem together. The counsellor puts them through a variety of tasks to try and work out what the issue is and when both halves of the couple talk candidly about the failures in their relationship, the audience assume quite quickly the direction the film is headed in. Although, McDowell is pretty clear from the start that this isn’t going to be your usual by the numbers drama; for instance, when Ethan explains about a night when he tries to reimagine the couple’s first night together (which goes horribly wrong), it’s so very funny. But when the counsellor sees something is missing between them, he ships them off to the middle of nowhere, to a retreat where he has apparently sent so many couples before them.

This is when the film becomes interesting; for the rest of The One I Love, the only two people on screen are Sophie and Ethan 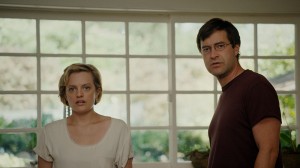 (and a credit to both the amazing performances of the film). They take their time exploring their surroundings and getting to know the beautiful property that will become their hopeful saviour. Things seems pretty normal; the couple unpack, cook and drink, they share drags on the weed that Sophie snuck along with her and they laugh but as the night goes on, it becomes pretty clear to the audience that all is not as it would seem and things are going to get out of control pretty quickly.

What is wonderful about The One I Love is the sheer number of intriguing and interesting questions that it poses throughout; how would you react if you were faced with everything you really have ever dreamed off, would you be able to face your partner if you realised what was missing in your relationship and how would you feel if your partner was getting everything they deserved from someone else? These do sound like pretty intense and often dark questions, but The One I Love brings such humour and lightness to them, that the audience don’t feel dragged down by the weight of them at all. 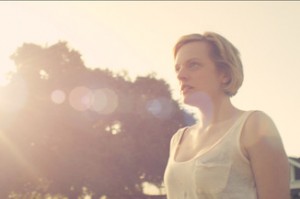 The chemistry between Moss and Duplass is also such a merit of the film; they have been perfectly cast as the emotionally unavailable, clueless guy and the desperate wife who is stuck between the betrayal of her husband and her intense love for him. Both balance the light with the dark; going from something touching, to hilarious and taking a detour to dramatic on the way. But ultimately, what is most important about them is that as a couple, they feel real. The audience are told very quickly to simply believe what they are being shown, but the reason this works so well is that the characters are so multilayered and rounded, accompanied by some outstanding writing, that it is easy to believe the often unbelievable.

The One I Love should go down in history as breaking all the rules; we have, in debut filmmaker McDowell, someone who makes cinema fun again; managing comedy with the thought provoking and topping it off with a feeling of edge of your seat action. Keep your eyes open for this one – its great!