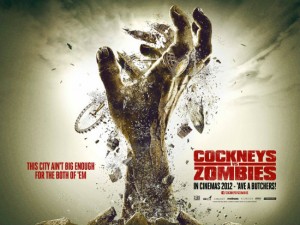 It would be difficult to have a long boat race and not giraffe over this horror comedy, a surprising gem which manages to breath some new life into the horror comedy genre post Shaun of the Dead.

This time the focus is off the middle class and onto the working, as we follow a group of bank robbers who during a zombie outbreak decide to save their aging Granddad and his friends.

The cast is full of comedic talent, both fresh faces and acting veterans. Alan Ford of course is in his element, but particular standout performances come from Ashley Thomas as gun nut Mental Mickey and Richard Briers’ pervy pensioner. Lead man, Harry Treadaway will certainly be a British actor to watch for the future, having a strong screen magnetism which many young actors lack.

The humour is very British, with references to everything from football to the economy to (naturally) cockney rhyming slang.

What’s refreshing is that as well as comedy, the horror aspect still remains, with numerous strong set action pieces which are full of originality. A particular highlight is the slow speed chase between Briers on his zimmerframe and the stumbling zombie horde and the intial bank robbery itself. 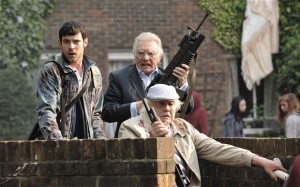 Too many British films of late have seemed to villainize the working class, whether mocking them in Tower Block or criminalising them (just about every Adam Deacon/ Danny DIRE film), so it is good to see something which moves away from this. If only more British films were made like this, setting out to bring some originality to genre films whilst creating something which the public may actually want to see.

Whilst Cockney’s vs Zombies is not as ground breaking as Shaun of the Dead, it is an entertaining and thoroughly enjoyable piece of cinema fare in it’s own right and well worth cathcing.