Diego Quemada-Diez worked in the camera department on Land and Freedom, 21 Grams, The Constant Gardener and Man on Fire amongst others. The Golden Dream (out now) is his impressive debut feature as writer/director. 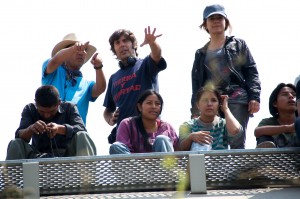 Tell us about the process of putting the script together.

Diego Quemada-Diez: My original idea for the film was to do In This World by Michael Winterbottom going instead from Mexico to the US but I couldn’t get the money. I wanted to do a film that had a big scope, a production where the heroes were these wonderful children and the migrants. I really wanted to make it at least a two million dollar movie with trains and action sequences.

So eventually I thought, ok instead of doing that what if I just take the best from fiction and the best from documentary. Through fiction I can construct the characters and the dramatic structure and make people live an experience through identification with a character. I can have a dramatic arc and reproduce events that in a documentary people would just tell you about. On the other hand I can incorporate as much as we can from the reality we encounter and I cast villagers from the villages we pass and real migrants. So the idea was to work with non-actors and then I’ll insert them into this completely real situation. They also didn’t see the script; we shot it in chronological order so they had a real experience.

Was the dialogue all scripted or did you work with scene outlines?

Diego Quemada-Diez: I would read them the scene five minutes before shooting and say this is what we wrote – how would you say it to your friend? And they would throw me lines and I would choose which one and it was fascinating process. I would just rewrite on the set. My script is full of notes. So it is spoken the way they speak and this idea of ‘Worry only about the context that provokes behaviour but not really telling them how to behave’. So you allow them to be themselves within those situations. Ken Loach said, “The best direction is indirect, it’s unseen”. You worry a lot about the casting – I saw six thousand kids.

How did go about picking your young lead actors?

Diego Quemada-Diez: A lot of it is instinct but the first thing that you look for is people who are interesting to watch. People you can observe for hours. Yes they have a spark but everything they do is interesting which I think a great actor or actress has. Then you look for the power in their eyes, it’s important that they have the power to communicate a lot because you don’t want to do film-theatre, or communicate information through dialogue, but to communicate just through presence and inner force. I didn’t want to have victims I wanted to have very powerful kids. I would give them situations to improvise and I would also put on music and ask them to dance to see their connection with their body and do something much more intuitive as opposed to intellectual acting.

How has your background as a cameraman influenced your filmmaking?

Diego Quemada-Diez: I went up the ladder in the camera department because I felt that I needed to learn the craft and for me the craft of filmmaking is telling stories with images. I needed to learn from the great cameramen that I worked with and also directors so I could take what made sense to me and what doesn’t. The methods that are applied in the movie are a combination of many things but the biggest influence is what I learned from Ken [Loach] and Barry [Ackroyd] his cameraman, which comes from Chris Menges and Brian Probyn and the BBC documentary school. I went back to the origins of working with Ken and simplicity, simplicity of the form, nothing pretentious, no tricks, doing something more classical where what you focus on is the content, the characters, the narrative, and it’s not like “Here I am – the author”. I also like what Ken taught me “The director is responsible for telling the story” so you go round with a viewfinder and you collaborate with your cameraman or camerawoman together but at the end you are responsible for telling the story. You do it always at eye-level, as an observer. 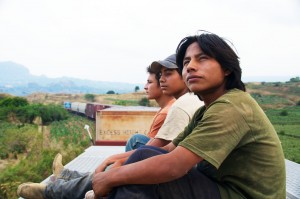 How do you combine using real people and your performers – did you hop onto the actual trains?

Diego Quemada-Diez: The idea is that it would feel like we just hopped on, like a documentary, a piece of life. But in reality you’re like “This is the time and this is the money” so you need to negotiate with those things in order to make the movie, but you cannot negotiate the essence of the movie. I wanted a nine-week shoot but only got six. I had to make the train days very productive. What happens if you jump on the train without control is that it doesn’t stop for six hours. So every time you want to change camera positions or you want to move the actors around – it’s impossible, because you have to wait six hours. So we were like “Ok we’ve got to have our own train where we can have control” but let’s do it with the same train the migrants take and lets put the same migrants that go on the train and on the same route they go. So it’s the same thing but we’re paying the gas, it’s a safe train, we tell the migrants “You get on this train you’re going to get a salary, we’ll give you food and water and it’s a safe train for you” so it was in the interest of everyone and it worked out very well. So we finish the camera setup, we stop the train, move to another set up and start it again.

Endings are so hard to get right but yours seems true and tough while also full of hope.

Diego Quemada-Diez: I like a lot the end of The Incredible Shrinking Man. At the end they talk about microcosms and as he becomes smaller and smaller he becomes a speck of dust and he’s blown out. He accepts this, he says “Now finally I accept that I am changing all the time and eventually I will just become nothing” and then they cut to the stars and the universe.
I wanted the snow to be like the stars so you would feel “Yeah, we have these problems, we have a lot to work with in our reality, but at the same time we’re just a little point of life in the universe and we have great potential”.

‘The Golden Dream’ is out now