The Old Man and the Gun DVD Review 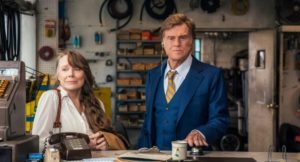 David Lowery has been hit and miss as a film maker recently. PETES DRAGON was a tender, coming of age drama. One that restored Disney to a justified reboot frenzy. GHOST STORY however, was more a glacial paced, pretentious, dull meditation on martial loss. THE OLD MAN AND THE GUN is somewhat floating rapidly in between the two. It is an improvement on one but lacks some of the subtle touches of the other. 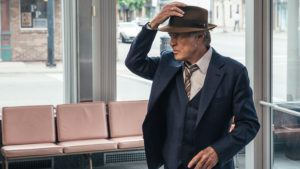 Based on a true story, that of Forrest Tucker (Robert Redford) who was a well known career criminal. One that could just not stay in any prison and one that couldn’t not steal from banks. Redford plays as Tucker, he plays it as a charming grifter, oozing charisma warmth. Alongside him is Dallas Police Detective John Hunt (Casey Affleck), an amalgam of police personnel that tracked him down. Affleck is humourless and gritty but it works for his character. Sissy Spacek stars as Jewel, giving great connections and zing to the scenes with Redford. 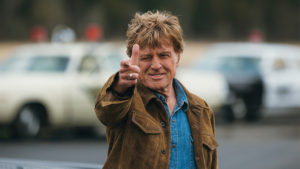 Along for the robbery ride is Waller (Tom Waits) and Teddy Green (Danny Glover). When Redford turns up with them, we can see moments of magic. Cinema from three great actors. Witty, punchy and playful all together. So that is it. GHOST STORY seemed to ascend its own sphincter but at least it was something. THE OLD MAN AND THE GUN is developing themes of age, legend and legacy. All with a stellar cast that come together with chemistry. Eventually it all creates a charming, gentle but utterly empty film for you to sit through and leave as you came in.