Barn burner Ben Quick (Paul Newman) has to flee from one small town to another. This is until he finds himself in Frenchman’s Bend, a small town that is held up by the Varner family and in particular the patriarch Will Varner (Orson Welles). Things begin to come to ahead when Quick is drawn into the family business and Will’s son Jody (Anthony Franciosa) and  daughter Clara (Joanne woodward) come directly in conflict with him. 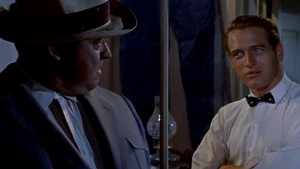 I confess that this for me is a film to watch on a long hot day or a cold winter night. Spend a Sunday afternoon in the presence of a melodrama as a classical tale that is based on not one but 3 Faulkner novels. Novels that look at legacy in the south and the ancient Chinese concept of fu bu guo san dai. Look it up, its amazingly apt here. The idea of the three generations. One who earns it all, one that looks after it all and one that spends it all. Will sees Son as the next step in this chain and sees Ben Quick as the son he wanted, that would stop the cycle.

Do not doubt that the film you are about to watch, read on or buy is a masterpiece. It has a selection of amazing actors, that make many a modern film look dull and ponderous in envy.  All who perform deserve to be admired for adding such amazing texture of subtle emotional depth, without the film becoming over burdened with performance (although Welles steals the show and hogs the light bar when he is with Newman.)  A superb script written by Irving Ravetch and Harriet Frank, Jr and directed with ease but equal sense of craft by Martin Ritt.

The disk has little extras but the film is so good. So, So good that I am imploring you to buy it. I loved it and feel that if you like great film performances, great weighted and analysable stories or even you may like a character piece then this is for you.