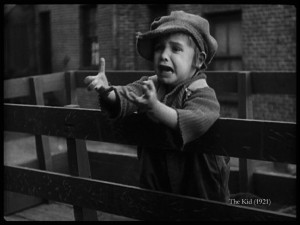 The tramp has just found an abandoned baby in an alleyway. He tries unsuccessfully to return it to a nursing mother, a crippled man and even back to the street. Five years later and the two are father and son. The tramp has set up as a conman. The con is simple and involves the kid smashing windows and him coming into fix them, for a price of course. The owners think it providence but the cops otherwise. When the buy falls sick and the tramp is threatened with losing him, everything will be done to save him.

Coming from the poorest part of the east end of London at the start of the century that saw millions become richer and even more poorer. Charlie Chaplin became an international icon. He is so recognizable that when I showed the image of Chaplin to an 18 year old friend, she instantly said his name. She even recognized his most famous character and star of The Kid, The Tramp. Funny really, I find it strange that he is so well known still. He has been dead for almost 40 years, longer than I have even been alive. He also had not worked in over ten years before that and Chaplin made many of his best known films almost a century ago. But still we know that face and those people like they are always on television. Celebrity is hard to kill off for a person that makes us have a connection to them. He also is not known as much for being a director but more for being an actor. An actor I might add that worked in one very specific genre and these films often had very simply plotting. They are also rarely seen by the younger generations or by anyone but film types. 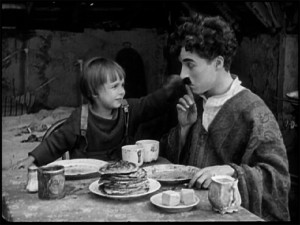 This is a real shame and shows up the sad reaction to silent cinema. The Kid is more than just a comedy and this is the first problem. This genre has never and does not garner respect. When awards are handed out, looked over or ignored. When academics write pieces on film, the person and not the piece are defined and explored. The second problem is that it is not a comedy about poverty and the experience of a young kid in the slums of the US. What it is, in my mind is Chaplin coming to terms with his young life and his younger self. Chaplin is one of the most influential and interesting film makers to ever have graced the screen. The Kid for many is his most powerful film because it is so personal. It is also very funny and very clever but not excessive in either.

How to make movies by Chaplin