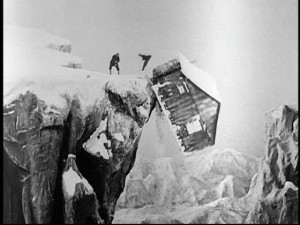 Leaning to one side

The search for riches takes many a man ip into the dark, snow bound hills of Georgia. When the loveable rogue The Tramp ventures up into its hills however, it all leads too mischief. First comes a cabin which is empty of everything bar a man with a headache. Next comes Bandits, bears and boots as main courses. The Tramp does of course survive it all and even comes out on top. On a return trip to the local town he meets a chorus girl and falls. This brings about another cabin and a whole heap of trouble.

American history is built on the prospecting of young people and exploitation of resources. Tales of exploration are frequently told and retold. Songs have been sung and even mtyhs have been sold. Often parties of travellers searched for a lost Eldorado. Gold pulled millions to mountains, snowy plains and diabolical ends. The making of vast amounts of money from a lucky find or a claim was not unusual or uncommon however and so more came.  When cinema in its infancy took on the subjects of the time, this was often a central theme. 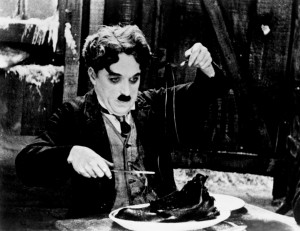 The Gold Rush is not only a simple tale of rags to riches. No sir, it is about the world that all of the above breed and brought into being. Shady types running of to make millions after killing someone or stealing something.Death was on the doorstep, some ran to religion and order to escape it. Others ran toward it with hands open, looking for the big winner. Chaplin again delights in his use of small detail, funny slapstick and straight up set pieces. His versatile in comedic performance is counter balanced wonderfully by his pathos. He is the hurt man that has a tender soul. A soul that expresses with eyes wide and glowing. His dreams are our own and his tears too. Delight at his warmth and his hopeful expectations. This film glows much from this and its a joy to behold. The term epic is right to apply to this magnificent film. In scope and in content the film tries to connect the events that made America, with the light heart of a magician. Ignore the commentary which is a little jarring and some of the jokes that are pulled along to breaking point. This is a master making you love film again.