The Hound of the Baskervilles DVD Review 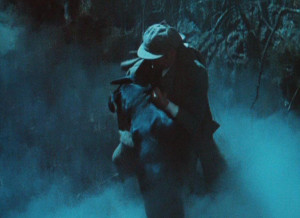 Who let the dogs out?

The legend of a hell hound that stalks and torments the Baskerville family, may seem like sheer bunkum. After a previous Lord of the estate, was killed by a rabid dog after he had attacked and raped a beautiful local woman. Then when the head of the estate and last surviving English link to the title, Sir Henry Baskerville is found dead at his estate and country home on the moors from a dog attack, some begin to question its validity. The American link and final title holder has just arrived and is afraid. So he hires Sherlock Holmes and Dr Watson to find the reason for the deaths, in hope of solving the legend and saving his life. 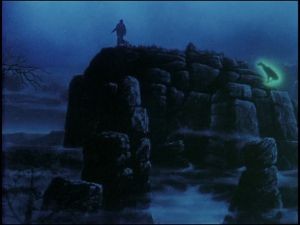 Like many an adaptation, it is the source that you first look too. For me Holmes is the face of rational thought and discourse. This is considered his greatest story and the work that defined his abilities. What you get with the film is both a rewarding acknowledgement of that and a slightly dull interpretation of the legend. Before I go on, please read about the copyright issues that this film faced and so take from me that this had a great effect on its production. Now visually it is very good and above the television fair that it was destined for. Acting is of a high class and features Ian Richardson as a very understated, yet graceful Holmes. Denholm Elliott as a erratic type and Martin Shaw with a dodgy American accent. 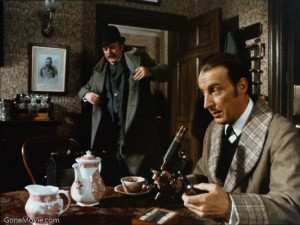 Wow that wasn’t what I expected!

The script is the first of three points it fails on. It is crammed and cropped. It lacks the punch of other revisions and is too much like the book it was based on. Then you have the length of the piece, its focus on time hampers its range and ability. The final problem is that the film is another one of those cult for no sake other than some dust munching geeks think it is cool. I hate this because it then brings about the problem of art and Cult film. This is not Cult film or at all special. It is a well acted and directed piece of TV. Nothing more and nothing less. Worth the price you have to pay? Nope. Worth the extras? Maybe as I like David Stuart Davies and feel he knows Holmes. So do what I did, watch it and don’t buy the thing….please