When punk band The Aint Rights turn up to a gig that has been organised for them at Nazi club and mecca for far right craziness in the backwoods of Oregon, they hope to get the paycheck and leave. The problems come about when after their set and while collecting their gear, one of the band remembers that she left her phone in the green room. When she returns to collect it, she finds the dead body of a local drug pusher and Nazi girl. Sadly those who murdered her are still in the room and things are about to get worse. 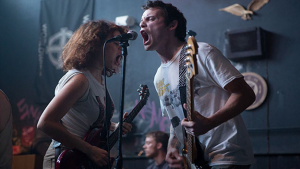 Jeremy Saulnier is a director on many a film fans watch list. Blue Ruin established a reflection on modernity that was both darkly sardonic and unsuspectingly menacing. In this world we are trapped within a destiny that has been shaped by external forces. They have a debt owed and want it paid. In Green Room again we have this debt, the punk rockers are free spirited but rejecting of convention (blast those Punk guys) and reality is setting out to shaft them in more horrific ways and without remorse. 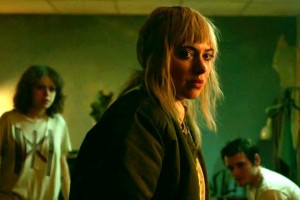 Green Room works well as a thriller for its first 45 minutes. It dispatches and plays with the viewer like a slasher flick. This explains the positive response from this demo graph. It has a flabby centre in that it repeats itself and does so without playing with tempo. This makes the violence become a little sadistic but I suspect also Saulnier wanted it to make the viewer complicit in it. I am unsure it works but the direction helps the repetition feel less heavy. The reason in truth is what I found. I was mesmerised by the space and loved being in the grim shell of an ideology and a movement decaying from the inside. 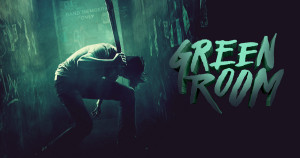 The other area of real intense power is the performances. Yelchin is good and will be sadly missed. Potts is very good, I didn’t like her as an actress but here she gives that under played performance to perfection. Also good is Stewart who speaks a lot, very quietly and with real engaging menace. Overall in my opinion Green Room is a genre fans delight, a thriller audiences Friday night and Saulnier fans next step on his way to the top. Is it as good as it has been made out to be? No but then what is.